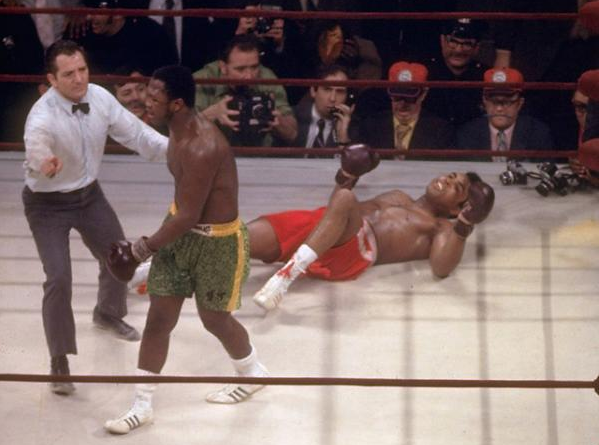 The picture above is from "The Fight of the Century," March 8, 1971. It is the 15th and final round of the epic battle, and Joe Frazier, in the green trunks, is headed for his corner after having knocked Ali down, while referee Arthur Mercante prepares the count. Ali got up well before the 10-count, to no avail; the knockdown was the icing on the cake of a unanimous decision for Frazier, the winner and still champion. It was Frazier, the champ, who was the fighter with something to prove that night. Ali, as was his wont, had well and truly overshadowed him in the buildup to the bout, and because of the circumstances surrounding Ali's loss of the crown and Frazier's subsequent ascendancy to the throne, there were many who would not accept him as the real champion until he defeated Ali in the ring. 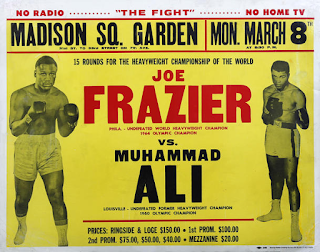 That fight seemed a true battle of good vs. evil, with a polarized America choosing sides between Frazier, the hard-working everyman who was either modest and unassuming or a tool of "The Man" taking on Ali, who - depending on who you listened to - was either an American-hating radical or a man who spoke truth on an unjust war. And believe me, everyone took sides. I may or may not have a TV Guide somewhere that has my mother's writing on it; she had kept score of the fight as we listed to round-by-round recaps on the radio (there was no home television), marking an "F" for Frazier, a "C" for Clay, whose conversion she never really bought. The Madison Square Garden crowd, which had started out chanting "Ali, Ali!" at the beginning, was shouting "Joe, Joe!" as the courageous Frazier won a brutal fight. Ali had lost, and there were many, many Americans who were glad. And then things began to change, and someone who was alive in the late '60s and remembered what was going on might find it just a bit ironic. For although Fitzgerald famously said there were no second acts in America, Muhammad Ali enjoyed a second act that not only defies precedent, it almost defies explanation.

Back when it all started, when this brash young man was called Cassius Clay, he had something going for him. He'd won a gold medal in the 1956 Olympics, and as a pro he offered a style that was unique in boxing, that of the dancer with the quick hands. It wasn't unprecedented, but he was better at it than most. His shtick was something you either loved or hated - he liked to talk, and was good at it; he was called a "loudmouth" (such a charming, innocent phrase back then) who enjoyed predicting when his opponents would fall, often in bad verse.  Eventually, he worked his way up to a title shot against the champ, Sonny Liston, a thug and mob enforcer, one who had hardly endeared himself to the sporting public, but he seemed unbeatable nonetheless. Clay's victory was one of the great boxing upsets, and his youthful effervescence was seen by many as a breath of fresh air in a sport that for too long had been shrouded in corruption and cigar smoke.

Following that first fight, Clay announced that he would be changing his name and religion, adopting the faith of the radical Nation of Islam, founded by Malcolm X.* He refused military induction, reciting a list of grievances against America (many valid, to be sure) and pointing out the Viet Cong had never treated him as badly as had White America. (Probably because they didn't know who he was and hadn't had the chance to do something really bad to him, like killing him.) His popularity, already starting to wane as the public tired of his vaudeville act, fell further, even as the liberal elite, sensing a kindred soul in the fight against Vietnam, began the long process of rehabilitating his image. And of course his refusal to fight, whether principled or not, simply meant that another young American, probably black, had to go in his place. As a political act it might have had significance, although that significance is probably exaggerated today; for practical purposes, it changed nothing.

*Ali first announced that he would be known as "Cassius X," an idea ditched after he split with Malcolm X. 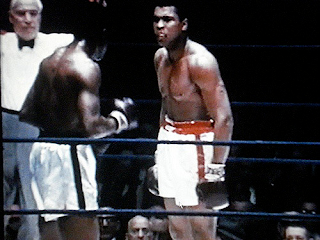 Anyone born in the last 40 years or so could be forgiven for seeing Ali as a lovable teddy bear, a combination of George Foreman and Shaquille O'Neal. That isn't how it was at the time, though. He was known for cruelly taunting his opponents, carrying Ernie Terrell (who had made the fatal mistake of referring to him as Clay) for several rounds after he could have knocked him out, inflicting unnecessary punishment while repeatedly yelling, "What's my name?" (Right) He also had this habit of coming up with names for his opponents that were not merely unflattering, they were often crude and insulting. For Joe Frazier, who had spoken out in favor of Ali's right to fight, his thanks was to be called a gorilla and an Uncle Tom. (Incidentally, Ali had promised that if he lost that first fight to Frazier, he would crawl across the ring on his knees and kiss Frazier's shoes; he didn't, of course. Like most bullies, he never backed up his words when things went against him.)

And always there was the incessant chattering, his motormouth travelling faster than the propeller on an Evenrud; writing at the American Spectator Larry Thornberry observed that "The doggerel verse he spouted, which some insist on calling poetry, was puerile and sub-junior high school grade." He used to say it wasn't bragging if he could back it up, and his sycophantic supporters agreed, but as Walter Brennan used to say in The Guns of Will Sonnett, "no brag, just fact." Maybe it was all an act with him - sportsmen are in the entertainment business, after all - and perhaps I might be able to overlook it, were it not for that meanness and crudity that was always just below the surface.

A big show was made when he lit the Olympic flame in Atlanta in 1996, already plagued by Parkinson's, and if his image hadn't already been rehabilitated, it surely was in that moment. Among other things, he was presented with a replacement gold medal for the one he had won in the 1956 Olympics and subsequently "lost." I don't recall anyone mentioning at the time that the reason he needed a replacement was because he claimed to have thrown the original in the Ohio River after being refused service at a whites-only restaurant. Some suggest that was simply a story he made up; his friend Bundini Brown later told a writer that "Honkies sure bought into that one!" and added that Ali had simply lost the medal. So even an act that was, if not noble, at least understandable, was a fraud. At the time of his death he was hailed as a hero of racial reform, yet the man once said that "No intelligent person wants to mix races.” Of Caucasians, he said "You're my enemy. My enemy is the white people!" After his conversion to Islam, he was quoted as saying, "I don’t need no white man’s Jesus."

If all of this makes it sound as if I wasn't a big fan of Muhammad Ali, I wasn't. I can recall only one time when I tolerated his winning a bout; it was the rematch with Leon Spinks, after the young man had upset Ali in a split decision to win the title. As time passed and it became plausible to think that Ali had lost the fight in order to guarantee a big gate for a rematch, I turned against Spinks for agreeing to a rematch so quickly (he was stripped of his title by one organization for ignoring a mandatory defense against the top contender), and so when Ali did win the title back for a third time, before an enormous crowd in the Superdome, I could at least tolerate it. He retired after that fight, but he was unable to stay away from the spotlight, and launched an extremely ill-advised comeback, which tarnished that reputation. 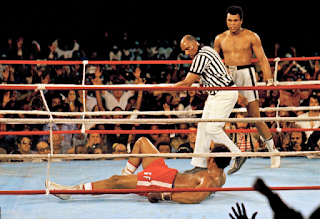 None of this is to say that Ali wasn't a gifted, even great fighter; the three fights against Frazier (only the first of which he lost) were memorable, particularly "The Thrilla in Manila." He beat George Foremen at a time when Foreman, like Sonny Liston before him, was thought unbeatable. He was a fighting champion, taking on all contenders and bringing title fights back to home television, if only for a time. Of course, even then one has to acknowledge the memorable time when Ali pressed the great Joe Louis (whom Ali had also referred to as an Uncle Tom). Joe, could you have beaten me, Ali kept asking, and although Louis was reluctant to be dragged into the conversation, he finally allowed as to how when he had been champion, sportswriters had looked at the quality of his opponents and accused him of going on what was called the "Bum of the Month" tour. "Are you calling me a bum?" Ali yelled, to which Louis replied, "I'm saying you would have been on the tour." That's my favorite story about Muhammad Ali, one that always makes me smile, and it's significant that in it, he's the butt of the joke.

Understand that I wished no ill on Ali. His fight against Parkinson's was courageous, and in his last years he truly became a figure to be pitied, even if pity was a quality he seldom showed others. It is a mistake to speculate on what happens to people when they die, what the state of their soul was, what the disposition of that soul was. As someone said, it's far above my paygrade. And so as any good Christian must, I pray that at the very end, when he was offered the choice, Ali chose to accept the loving God represented by Christ. We'll never know, unless we find out after our own particular judgment. But neither is it right to sanctify the deceased, to make them something less than human. We see too much of that in our touchy-feely society as it is, and each time we see someone given this treatment, it becomes less dignified. People change, after all, and it's likely that Ali changed many of his more racially-charged viewpoints (at least publicly). But we do him no favors by whitewashing the past, pretending that these things never happened. it's often a powerful moment when they do - whitewashing the past, pretending Ali wasn't like this, does him no favors. Oh well; that's the way we are nowadays.

Muhammad Ali, named after a famous abolitionist, was a man, with good points and bad. For whatever reason, I never fell under his spell, and since this is a personal blog with personal views, this is what you're going to get. If you don't like it, think of it at least as a corrective to the saccharine "journalism" you've heard too much about.

Here, in its entirety, is "The Fight of the Century," so heralded at the time that Frank Sinatra could only get in by taking photographs for Life magazine; Burt Lancaster earned his attendance by providing color commentary for Don Dunphy's blow-by-blow on the closed-circuit broadcast. It isn't shown nearly as often as Ali-Frazier III, so if you haven't seen it before, watch and appreciate what a battle it was - and what a fighter Joe Frazier was.