Uh, why do we celebrate Independence Day again? 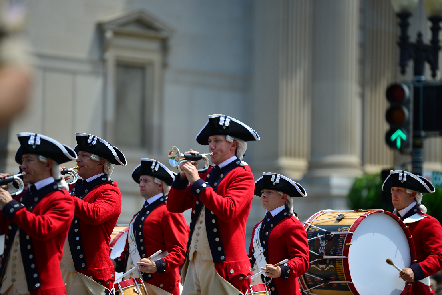 Proceeds from the sales of these [special design Independence Day] jerseys and caps are going to MLB’s Welcome Back Veterans charity. That’s very nice, but it’s also the latest example of MLB promoting bad history and bad civics, because Independence Day is not about honoring the military. It’s the anniversary of when the Declaration of Independence was ratified by the Continental Congress. A more appropriate move would be to donate funds to the National Archives (where the original Declaration is preserved), or to donate funds to Independence Hall National Historical Park (site of Independence Hall, where the Declaration was debated and adopted), or to support American history programs in public schools (which could teach kids, among other things, that Independence Day is not about the military). Instead, MLB has yet again chosen to conflate patriotism with support for the military — a terrible piece of political messaging. Very disappointing.


Couldn't agree more. Words mean things, and special dates commemorate special occasions. At the risk of sounding non-patriotic to those of a knee-jerk disposition, the Fourth of July, commonly known in the United States as Independence Day, has nothing to do with the military. You could argue that the independence of the United States is ultimately due to the military, in that they achieved victory over the British at Yorktown, but even in this case the American victory is due more to the greatness of one man - George Washington - than to a generic military.

But the point remains. Independence Day is perhaps the only holiday we have that actually honors politicians - the men willing to pledge their lives, their fortunes, and their sacred honor in the name of an independence that no country had ever won under similar circumstances. These men - unlike our politicians of today, perhaps - were willing to risk it all, knowing that charges of treason, and possible execution, were the certain result should their gamble fail.

Using Independence Day as yet another occasion to honor the military, which was also the subliminal message of MLB's game at Fort Bragg on Sunday, is just plain bad history. It is no disservice to the military to point this out. We have Memorial Day to honor those who gave their lives for their country, Veterans Day to honor those who have served in the past, and Armed Forces Day to honor those currently serving. That's pretty much all-inclusive, don't you think? What we're supposed to be honoring on the Fourth of July is America's declaration of independence from the United Kingdom. The message to Major League Baseball - and to everyone else out there who uses the day as another excuse to dress in camo and build up the military - is that you ought to think before you act, even if you'd be doing it for the first time. Cheap "patriotism" is no way to honor the Fourth.

On the other hand, since we seem to be losing our freedom at a consistent rate, perhaps the confusion is understandable. Maybe there just isn't that much independence worth celebrating anymore.
Email ThisBlogThis!Share to TwitterShare to FacebookShare to Pinterest
Labels: 4th of July, History, Pop Culture, Sports