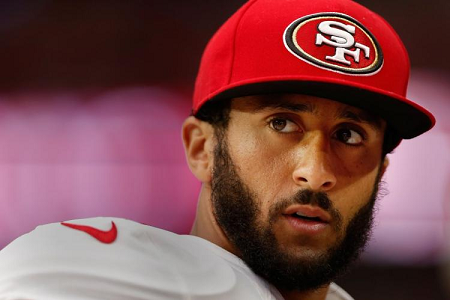 This whole Colin Kaepernick thing is fascinating for many reasons, not the least of which being that there are so many sides to it all. Dreher points out a lot of them, and I'd actually been thinking along those lines myself. I mean, it's hard enough for me to have pride in a country that sanctions the murder of unborn children, encourages (in some cases) the murder of the elderly and infirm, demands that Christians kowtow to prevailing opinion on things like homosexual marriage, and the like. And that doesn't even begin to get into questions like sending young men and women into combat for reasons that don't clearly present themselves.

So make no mistake about it, I understand where someone could be coming from with this stand. And I do think Kaepernick has the right to do what he's doing; whether or not the First Amendment applies to private industry, there's still such a thing as freedom of political expression in this country - at least for now. Provided that one recognizes the possibility of blowback for their actions, there should be no question about having the right to take a political stand. For years blacks had what they thought of as their own national anthem, so this itself is nothing new.

I also don't go for the idea that his actions somehow "disrespect" the military. While the military may well be credited for winning American independence in the Revolution, the truth of the matter is that this army was led by a politician - George Washington - and was spurred to action by an entire Congress of politicians, the Founding Fathers. It is no lack of respect of America's armed forces to say that the National Anthem stands for more than just them. To say so might actually disrespect the rest of America. The Anthem belongs to all of us, after all. It does seem that in the last few years we've turned almost every major holiday in this country, with the exception of Christmas, Easter, and Valentine's Day, into some type of tribute to our soldiers. Let's honor them by all means, but leave us not turn everything into a cause célèbre.

Things get murkier when it comes down to the case of Kaepernick specifically. This may blow my cover when it comes to how much I pay attention to the NFL, but until this I didn't even know that Kaepernick was partly black. I just saw a scruffy guy with a beard and a lot of tats, and when you put him in a football uniform there isn't much else showing. That's why I was confused when this first came to light, because I wondered what was in it for him. Now I understand that a little better, but it hardly answers my questions. Most of these questions have been raised by others, but that very fact means they're good questions:


Truth be told, I find the discussion about Kaepernick far more interesting than Kaepernick himself, which might be the cruelest cut of all if he is in fact just trolling for publicity. Dreher asks a couple of pertinent questions, and where I break severely with him is in the way I react to them:

We may see no contradiction between being a good Christian and a good American, but what happens when Americans as a whole look at dissenting Christians and call us un-American for the things we believe and do? Will we stand for the National Anthem then? If so, will we stand for the America we think is real, versus this politicized, debased America that the mainstream holds to? Or will it be more important for us not to stand, and to accept whatever consequences come with that?

What will it cost us if we lose the ability to stand together for the National Anthem? Is it worth what we stand to gain

Dreher typically reacts with horror to this thought, of America breaking up, but I don't; I've a hard time thinking of this as a unified country for some time. Dreher craves order, and freaks out when there's even a whiff of anarchy (and I don't mean the French Revolution kind); were it not for that, I wonder if he wouldn't be able to see that this ship sailed a long, long time ago. We're split, not just on ideological disagreements, but increasingly on fundamental questions of life, liberty and the pursuit of happiness. When I ask the questions I did in my opening paragraph, I'm not just wondering about a hypothetical situation - it already exists. Dreher, for as pessimistic as he is, only intellectualizes that we might have passed the point of no return, when the only question is whether the split is peaceful or not. For many of us, thought, the upside of such a split continues to seem far greater than the downside of remaining one nation, even though it may not be under God (or so we think, anyway) and doesn't offer either liberty or justice for all.

I think the time is coming, and in fact is already here. We just haven't felt the shockwaves yet.
Email ThisBlogThis!Share to TwitterShare to FacebookShare to Pinterest
Labels: America, Freedom, Religious Freedom, Sports