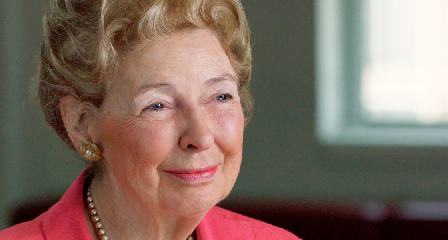 The first time I ever heard of Phyllis Schlafly, I was in high school and she was fighting against the Equal Rights Amendment. I didn't really understand the moral dimensions of it back then - it was more the political struggle that interested me. And I didn't have the advanced understanding of just what "equal rights" meant either, but I knew ERA wasn't passing the smell test for me. Almost alone at the time, she spoke out courageously against it, she fought it tooth and nail, and she won. I admired her greatly for it.

The last time I heard about Phyllis Schlafly, she was embroiled in a battle with the organization she'd founded, and was stumping for Donald Trump. I don't think Trump would have been her first choice, but as was the case with ERA, she took a look around, saw the society in which she lived crumbling around her, and decided that something needed to be done. In this case, it was a battle she was not able to fight personally, so I think she looked around and saw that there was at least one person out there who was willing to stand up to the tidal wave. I admired her greatly for it.

It was reminiscent of her struggle against ERA - at the time, the amendment had steamrolled through state after state, and its approval seemed a foregone conclusion. Nobody was really opposing it, and it you believed the words coming from its supporters, there was no reason on earth why any rational human being would. And then when Schlafly, in the best tradition of American conservatism, stood athwart history and yelled Stop. She rallied thousands and eventually millions to her cause, and ERA was stopped - even after it received an unprecedented time extension. Whatever misgivings she may have had about Trump (and I don't have any inside information that she had any), she saw in him someone similarly willing to yell Stop at those who sought to take over the country and its culture.

History will ultimately tell us - in about three months - how successful Trump will be in his efforts. We need not wonder about the efforts of Phyllis Schlafly, though. Far, far more than the feminist icons whom the media trumpeted, she represented the "silent majority" of women and influenced the American political scene. Comparing her to, say, Gloria Steinem is like comparing a giant and a pygmy. And yet if you were to depend on the media and our schools for your education, you might figure Schlafly was little more than a gadfly with a meager following, nothing like the giants of radical feminism.

Well, I suspect she was used to that, as all conservatives are. She understood that ultimately victory would be decided not in this world, but in the next, and that here the best she could do was to pray and fight for what her faith and her political instincts told her was right. She died at the age of 92, a good and faithful servant with a life well lived
Email ThisBlogThis!Share to TwitterShare to FacebookShare to Pinterest
Labels: Obituaries, PC, Phyllis Schlafly, Sexual politics