by Mitchell Hadley
On election day I'd posted the epic scene from Apocalypse Now where Morrison is singing "The End" while the helicopters swirl overhead. It wasn't meant to be a pessimistic bit, because I'm not a pessimistic guy. I'm a realist, which I realize some people believe to be a euphemism for pessimism. I don't look at it that way, at least not in my case; if it was, I'd have been listening to Leonard Cohen songs while I was writing it.

What I mean by all this is that this country has reached a precipice, and I don't know that it can be pulled from it. You may remember this piece from earlier in the year, in which Terry Teachout had wondered aloud whether or not America could continue as a country where people "talked past each other." I think now is the time to look at this again, particularly in light of the electoral map from Tuesday's election. 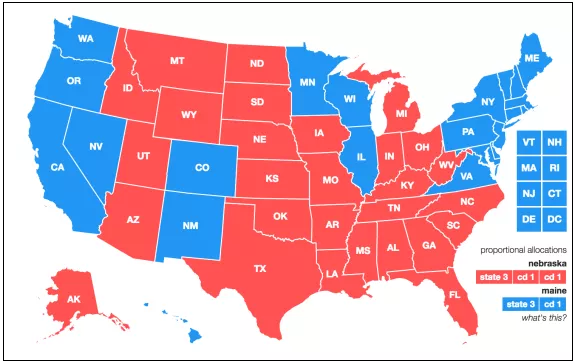 This first image is a visual of the electoral vote. Trump (the red states, natch) has won or is winning in 30 states, compared to 20 (plus the District of Columbia) for Clinton. It's a fairly stark map, because even though Clinton continues to lead in the popular vote (albeit by a very slim margin), not only does the electoral vote support Trump fairly decisively, you can see how Clinton's support (with a few outliers) is concentrated along both coasts, and stops around the Mason-Dixon line. But look at this second map: 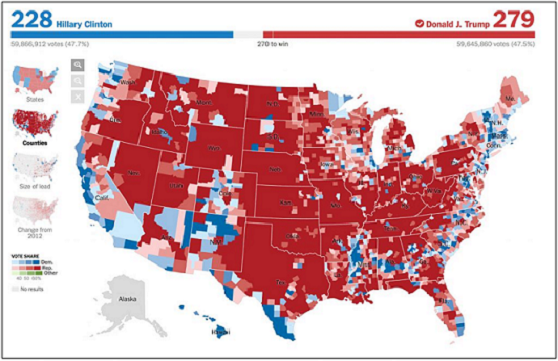 This shows the vote broken down by county, again using the red/blue key. As you can see, red dominates the map, with pockets of blue here and there. And then there's this one: 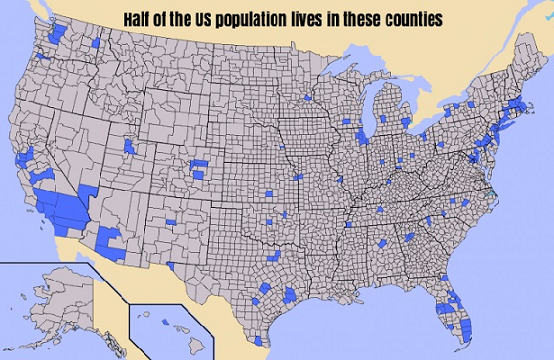 You've probably seen this floating around, showing that half of the population is concentrated in a very select areas. I've no idea how accurate this is, but even if it's not 100%, that's not the point.

What this indicates to me is that a growing number of the American people suspect that their votes no longer count, that a small number of states covering an increasingly small amount of landmass can determine the outcome of a national election. We could see a candidate win 35 or so states and still lose. He could win an overwhelming majority of counties and still lose.

Why is this important? Let me cite an example: a friend of mine called me Tuesday night. She lives in a state where only the three big population centers vote Democratic - the rest of the state goes Republican, but because most of the people in the state live in those three cities, the state almost always goes Democratic in the presidential election. She voted for Trump, "not that my vote counts," she added. In other words, she feels disenfranchised. And that's one person living in one city in one state. What happens if it reaches the point where entire states feel disenfranchised, where the residents of 35 states understand that it doesn't matter what they think, it doesn't matter what 70 of the states that make up the federation called the United States believe, that 30% of the states can dictate the nation's policy to everyone else. (And throw a hissy fit when they lose.)

That is not good; it's bad enough when individuals feel disenfranchised, but when entire states come to feel that way, then you truly have created "two Americas." A state that feels permanently shut out of the decision-making process can never truly feel like an active participant in the governing of that nation. That's what people mean when they talk about Balkanization, that's what they worry about when they look at countries where ethnic cleansing takes place. I'm not suggestion that ethnic (or ideological) cleansing is about to take place here, at least anytime in the near future, but I am saying that this is how nations break up. It's more than Teachout simply saying people talk past each other. It's that the credibility of majority rule itself is in danger, when that majority is concentrated in a small area relative to the size of the entire country, when a minority of states can dictate to the majority. It's called the tyranny of the minority, and it most definitely is on its way to happening here.

Tuesday's election is the exception that proves the rule, because if this continues, I don't know that we can see this kind of result again. The Californians are talking about secession, as Texans have done in the past, for the opposite reason. Perhaps it's time to let them go, to let them form nations that have more in common with each other than calling themselves a part of the "United States." Because the demographics suggest it's more like an enforced unity, and when we can't even agree on a common American culture or an agreed-upon definition of words upon which the debate can be framed, when we can't even agree on the existence of good and bad, right and wrong - well, there's nothing united about that.
Email ThisBlogThis!Share to TwitterShare to FacebookShare to Pinterest
Labels: American Collapse, American Culture, Politics