So churches won't open on Christmas Day, but yoga studios, movie theatres, restaurants are, while the NBA and NFL play! 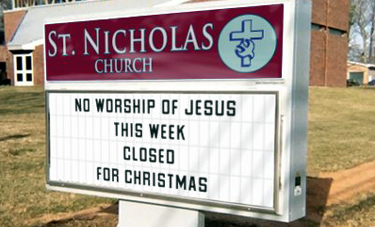 Christmas Day falling on a Sunday, as it usually is once every five, six, or eleven years, has developed into a disturbing fad for many hip Life Enhancement Centres.  Many of these “megachurches,” as they call themselves, full of rock bands and self-help teachings, have set the sad standard for too many churches, typically by reducing themselves to just the one worship service (no Bible study), but many are  locking the doors on Christmas Day Sunday morning and not doing services on Sunday.  Many of these venues are doing a gigantic party on Thursday, Friday, and Saturday.

Why are they giving Sunday over to entertainment the way we've given away Sunday to legalising alcohol sales?  The NBA has four games, the NFL has two games, movie theatres are open for the last of the major releases for Oscar consideration, the restaurants (especially sports bars) are open for the NBA and NFL games on the big screen (remember the early Christmas Day game is on the NFL Network which isn't available in many markets), even Hindu temples known as yoga studios are open for Christmas Day classes (at least two in one city in this state are open for classes when many churches have closed for the day).

And meanwhile, churches stay closed.  I cannot imagine how churches have given away their Sundays to entertainment venues open Sundays when churches are not, as we saw the Sunday after Hurricane Matthew, and now Christmas Day.  Do they even understand their meaning anymore?  Why is the secular allowed while the sacred is taking even the Holy Day off?  Last time one Life Enhancement Centre shut for Christmas, their "Christmas" services consisted of a rock concert featuring the sounds of one group whose name I cannot say playing a fad dance song of the era (no joke).  What might they try this time?
Email ThisBlogThis!Share to TwitterShare to FacebookShare to Pinterest
Labels: Christmas, Pop Culture, Religion