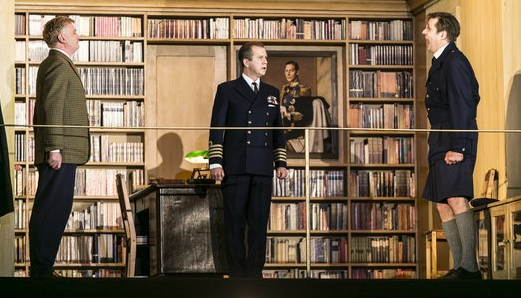 Last month we took a look at Benjamin Britten's intense Peter Grimes. This week it's Britten's equally intense Billy Budd, based on the novella by Herman Melville with a libretto by E.M. Forster and Eric Crozier. Like Grimes, there is a homosexual subtext to Billy Budd, but I don't think it's gratuitous; rather, it becomes an integral part of the plot.

Here we see a clip from the Metropolitan Opera in their 1997 production, featuring the great James Morris as John Claggart, Britten's personification of evil. This is Claggart's famous aria; interestingly, when I was talking with Mitchell about this, he mentioned that this aria was cut from NBC Opera's 1952 production. Why? Well, it's true that cuts had to be made in order to squeeze the opera into NBC's limited timespace (there were so many cuts, in fact, that NBC wound up calling it Scenes from Billy Budd), but the real reason was that NBC Opera mastermind Samuel Chotzinoff felt television could (and eventually would) streamline opera.

Claggart's aria, as is the case with many arias, was designed primarily to give us a glimpse into the character's thoughts and motivation. Chotzinoff reasoned that television, with its ability to offer close-ups and other special effects, would be able to convey emotions and thoughts more quickly and effetively - a kind of opera shorthand - rendering such long scenes unnecessary. I don't think he was right then (and neither did Britten; he was furious at the cuts NBC made, leading to a profound distrust of TV's ability to broadcast opera), and I don't think he's right now. This aria, which Chotzinoff thought unnecessary, has come to be seen as one of the opera's greatest moments. You be the judge.