What is it with the pope, anyway? 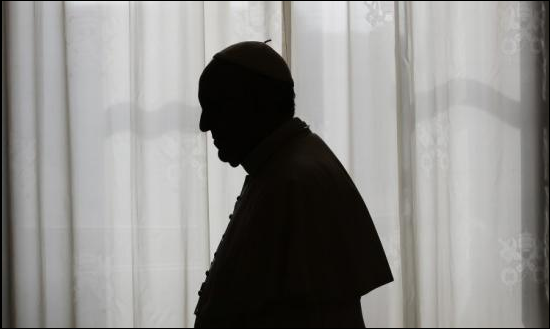 Our week-long look at the disastrous papacy of Francis continues with this piece that asks a simple question: does he aim to lead the Church, or destroy it? For that matter, does he really know what the Church teaches?

The Pope is in town, in case you haven't heard. Not in Dallas, where I am, but out father East.  There will be a fair amount of fuss being made, much of it over how Good Pope Francis is ushering in the new progressive nirvana, and probably even more about how the evil conservative Catholics, not to mention the evil Republicans, are busy slamming him.

Of course, that's the typical MSM slant.  It is true that many Republicans disagree with the Pope on matters environmental and economic, and it's also true that a lot of conservative - more likely traditionalist - Catholics have been having kittens over his papacy.  If you're a regular reader, you know I haven't been too happy about this papacy either, having gone so far as to suggest that if I were considering converting today (instead of twenty years ago when I did convert) I probably wouldn't do it because I would be looking at a Church that might have truth on its side, but didn't appear to stand for anything.

Now, it's very easy to find political commentary picking a bone with the Pope.  For instance, George Will had this to say:

Pope Francis embodies sanctity but comes trailing clouds of sanctimony. With a convert’s indiscriminate zeal, he embraces ideas impeccably fashionable, demonstrably false and deeply reactionary. They would devastate the poor on whose behalf he purports to speak — if his policy prescriptions were not as implausible as his social diagnoses are shrill.


Meanwhile, at the Weekly Standard, Jonathan Last asks if we should see the Pope as "Menace or Farce" (h/t Fr. Z)

For instance, the Holy Father seems to have a habit of appearing to endorse all sorts of left-wing political causes. There was the time he posed with environmental activists holding an anti-fracking T-shirt. And the time he posed for pictures holding a crucifix made from a hammer and a sickle. And the time he held up a poster calling for the British to hand the Falkland Islands back to Argentina. In each instance, the official Vatican response has been to suggest that Francis didn’t mean to endorse anything because he’ll pretty much smile and pick up anything you hand him, like some sort of consecrated Ron Burgundy.


Now, it is true that there's a ideological dimension to this; there's no question that the Pope is interjecting himself into a political discussion, not merely pointing out the existence of a problem, but offering explicitly political solutions, rather than charging the various legislatures with finding a solution.

There is, however, a spiritual aspect to this as well, and one can make a compelling case that in this religious, as opposed to political, dimension, the Pope continues to fall short.  The website The Federalist had a very good piece on this Monday, with Joy Pullmann writing, among other things, this:

I’m not sure who Pope Francis’s religious advisors are, but it seems they’ve forgotten the Gospel isn’t directly aimed at helping the poor or averting supposed environmental disasters. The Gospel is centrally about saving our eternal souls, about addressing spiritual—not material—poverty. Yes, the material world is broken because of sin, and it will be restored after the Last Day, but that’s an effect, and not the focus of scripture. What’s primary is our souls, not our pocketbooks.


She goes on to write:

In the course of loving our neighbors, as the Bible commands, of course we should seek to meet their physical needs, both through and beyond seeking to meet their spiritual needs. Acknowledging the truth that the world will always contain hungry people is not an excuse for not feeding the people in your life whom you have a duty to feed.

Maybe Pope Francis should welcome the environmental apocalypse he thinks is coming.
But the human condition of sin has ensured that everyone cannot be rich, healthy, and a lover of God. It’s sad, but true. We will never achieve utopia in this world. That’s kind of the central story arc of the Bible: How humans screwed themselves and the whole world up, and how Jesus has and will ultimately put things to right. Getting all the way to a perfect eternity, however, requires first an apocalypse.

So maybe Pope Francis should welcome the environmental apocalypse he thinks is coming. That’s partly a joke and partly serious, because every time I see another Planned Parenthood butchering video I am ready for Jesus to take me and my kiddos right up to Paradise and end this sick, mad world. But at the very least, Francis could do a better job communicating what my Catholic friends keep insisting to me he really does mean.


I get weary reading all this; it grieves me to see the Church that means so much to me disintegrating like this.  I'll say it again: Pope Francis could not be doing a better job driving the Church apart if he'd been sent by the Soviet Union (or Satan, take your pick) to ruin everything accomplished by the last two popes.  And I get just as weary being reminded by henny-penny hand-wringers that you're not allowed to criticize the Pope.  As a matter of fact, that really ticks me off.

Look; one should always be careful talking about the Pope.  The papacy is a divinely-ordained institution, and that's all there is to it.  Not only do I accept that, I wholeheartedly embraced it at the time of my conversion.  I believe it today.  But it also has to be said that the College of Cardinals don't always choose the right man for the office; anyone who thinks that the Holy Spirit divinely chooses the pope not only denies the existence of man's free will, he overlooks such occupants of Peter's Chair as the Borgia Popes.  In other words, one must respect the office, but there is no reason not to look at the specific occupant with a cocked eye.

Let's take this a step further, though.  Not only the papacy, but the basic clerical structure of the Church - bishops, priests and deacons - exists in the Bible.  What goes for the pope goes for them as well; respect the office, if not the occupant.

However, when it gets to the Curia, the governing organization of the Church - well, that's a man-made institution.  No only is there nothing divine about it, even the popes themselves have had to keep a very close eye on it from time to time for their own benefit, not to mention well-being.  The Curia, and the upcoming Synod of Bishops, is fair game as far as I'm concerned - again, as long as you remain somewhat respectful in your words.  Just as I get turned off by old ladies taking me to task for criticizing the pope, I also get torqued by people who behave like rabid Pavlovian dogs whenever Francis' name is mentioned.

Therefore: I have great concerns that Pope Francis is doing dramatic damage to the Church.  He disrespects those who have fought long and hard to defend tradition; his recent decision on annulments is nothing short of indefensible; his off-the-cuff statements are tiring at best and alarming at worst.  We like to talk about the "brand" today, and Francis has weakened the Catholic "brand" to an almost crippling degree.  Those who are the most impressed are those least likely to come back to the Church, or to defend the Church's traditional teachings.  Those most disregarded, most dismissed by him, are the ones who have fought the hardest and believe most fervently in Christ's teachings.  I don't know about you, but buddying up to your enemies and dissing your friends is not my idea of a successful business plan.

Francis' papacy has been a disaster, and if the upcoming Synod weakens the family further, as many expect it to, going back on two millennia of Church teaching (as well as Christ's words), then we see a real possibility of schism, and if that happens then we're really going to have some questions to ask.  All we know is that at the Last Judgment, we'll all be called to account for my actions.  I will not fare well when that happens, but at least I'd like to think I've tried to defend the Church, in my words if not always my actions.  However, the man who calls himself a "loyal son of the Chuirch" will have to do the same, and all in all I think I'd rather be in my shoes than his.

There's bound to be more to come on this, both from the Pope's trip and from me.

Do you wish someone would tell it like it really is? Why not read The Collaborator, the suspenseful "theater of the mind" involving a showdown between two powerful men, each of whom has a vision of what the Church is and what it believes in.  The Collaborator "helped me understand Pope Francis better," according to one critic - find out why this story is more important than ever.

Read more about The Collaborator, including reviews and an interview with me, at my author website. The book is also available through Amazon, Barnes & Noble, and other online sellers.
Email ThisBlogThis!Share to TwitterShare to FacebookShare to Pinterest
Labels: Catholic Church, Politics, Pope Francis