NBC Sports Network is running the annual retro promo for the 61st Annual Rebel 500 (see previous articles for the reason I refer to the race as such) in Florence, and they have made a huge error in their promotions for the mid-1980's theme of this year's NASCAR Throwback Round.  Look at the Peacock logo used by NBC for the weekend and the 2017, not 1976, NASCAR logo being used.  Historically NASCAR has used 1950's logos for this weekend, but why is NBC using the 1960's Peacock instead of the 1980's era logos that was a mix of the 1970's "N" with a Peacock logo that's different from the logo currently used since 1986 when the era being promoted is different? 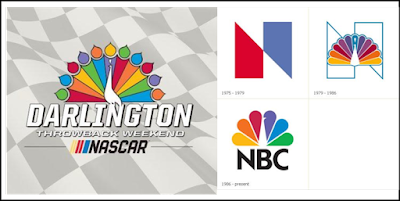 Is it a bit too peculiar to catch those retro mistakes in what is an annual retro round?  It just caught my attention that NBC was making mistakes in pushing the era this year compared to using period-correct NBC logos.  Are we coming to an era soon where retro will be caught for being correct or not?  Note this year that retro is even being pushed by some NASCAR teams in using vintage logos (Chip Ganassi Racing's unveil of Jamie McMurray's McDonald's Commodore features some retro looks, and the video used a vintage logo and vintage looks!).


And speaking of such, Sybarite5, which I've had the chance to see, posted this week something that fits with the retro round.  Rather listen to them than bad rock music!  An interesting take on Europop of that era from a group I've seen live!