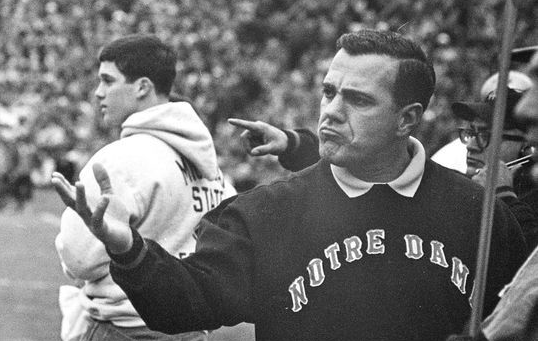 It was called "The Era of Ara," those eleven seasons when Ara Parseghian was the head coach at Notre Dame, and the Fighting Irish have really been spending the better part of a half-century trying to recapture that era. Lou Holtz won the games, but the was also a snake-oil salesman, and Ara Parseghian was never that. Dan Devine succeeded Parseghian and won a national title of his own, but even though he was Devine, he was never a God like Ara was (at least according to the students, who even Ara could make it stop snowing). Charlie Weiss was a big mouth, and Brian Kelly a hothead, and in-between there have been any number of poseurs and fakirs and the university itself has tarnished the image that once made every Catholic boy in the United States want to play football on its fields of green with the sun reflecting its golden rays on crisp autumn afternoons. The lesson to be learned is that legends can't be replicated, even at Notre Dame; there was only on Rockne, one Lehey, one Ara Parseghian.

I think Parseghian was one of those coaches who transcended sports; my wife, who's anything but a sports fan, remembers hearing about him growing up. He was probably the first college football coach I ever remembered. I was only six years old when he coached Notre Dame in one of the most famous college football games ever played, the controversial 10-10 "Game of the Century" with Michigan State in 1966, and I do have a vague recollection of that game, though not as clear as the 1973 Sugar Bowl, when the Fighting Irish beat Alabama 24-23 to finish the season as undefeated national champions. (As I've mentioned before, I got so worked up watching that game I was sick the next day, which means I've had the privilege of knowing what it feels like to have a hangover on New Year's Day without ever having had a drink.) He was already seen as a savior* when he arrived at Notre Dame from Northwestern following the 1963 season. The Irish had fallen on hard times, having all but ceased to be a player on the national scene, and Ara's Wildcats had made a regular practice of throttling Notre Dame in their annual games. Upon arriving in South Bend, Parseghian was given one task, and one only: return the school to football glory.

*It is, in fact, almost impossible to talk about Notre Dame without lapsing into religious imagery, no matter how hard one might try.

Now, whether or not anyone thought it would happen as quickly as it did, I'm not sure. Parseghian took a last-string quarterback, John Huarte, a player who'd never really been given any kind of chance by anyone else, and coached him to a Heisman Trophy in 1964. The team, which had finished 2-7 the year before, entered the final game of the 1964 season undefeated and ranked #1 in the country; they led USC 17-0 at halftime in Los Angeles before seeing the Trojans come back in heartbreaking fashion with a last-minute touchdown to win 20-17. The team returned to South Bend in the middle of the night, disconsolate - inconsolable, really; nothwithstanding how bad they'd been the previous year, they could only think of how close they'd come to winning it all - and then they found out on the bus trip back to campus from the airport that the people of South Bend had left their porch lights on, welcoming them back, back home.

It's important to know that backstory to appreciate the 10-10 tie in 1966, and why Parseghian played the end the way he did. I've written about the game here, what a hellacious buildup it had and how nobody'd really ever seen anything like it. Once again the team came to the end of the season (the next-to-last-game) with a shot at the title; with no bowl game to look forward to - Notre Dame did not play in bowls back then - the Fighting Irish had to get it done in the regular season. Their starting quarterback, Terry Hanratty, was knocked out in the first quarter, his backup, Coley O'Brien, was young, inexperienced, and diabetic. Hanratty wasn't the only starter to be injured, Michigan State (undefeated and ranked #2 themselves) had a large home crowd cheering them on, and the Spartans jumped out to a 10-0 lead before Notre Dame tied it 10-10 in the second half.

As the game wore on, with neither team able to take the lead, Parseghian kept his mind focused on one goal: the national championship. A loss by Notre Dame would end any chance of winning it. However, a tie would keep their hopes alive - this was the end of the season for Michigan State (with the Big 10's no-repeat rule, they weren't going bowling either), so they had no opportunity to improve their lot. The Irish, however, had one game remaining, the following week with USC, a chance to revenge 1964 and clinch 1966 all in one. He didn't exactly play for a tie, he insisted later, but he refused to take any chances that could result in a loss. His decision was scorned by many in the press, but it proved prescient; State sat home the following week as Notre Dame obliterated USC 51-0; the following week the AP voted the Irish national champions. After all the years of losing, after the anguish of 1964, Notre Dame was back.

As I said, they'd win again in 1973, and then after defeating Alabama in a rematch the following season in the Orange Bowl, ruining the Crimson Tide's undefeated season and a chance at the championship, Ara retired; the stress of big-time competition was, he said, getting to be too much for his health. He went into broadcasting, which we see all the time nowadays by coaches waiting for the next plum job opportunity to open up, but Parseghian was true to his word; he never coached again.
He was a television analyst until 1988, then worked for a medical foundation he'd created to fund research for a cure for Niemann-Pick disease, from which his family had suffered.

Jim Dent's wonderful book Resurrection (there's that religious imagery again) gives a vivid picture of life at Notre Dame prior to Parseghian's arrival, and Mike Celizik's The Biggest Game of Them All takes readers through that game against Michigan State, and the 1966 season in general. Both books present an impressive portrait of Parseghian as a man of integrity, committed to winning, yes - but also to his players, as well as to Notre Dame. You can agree or disagree with his decision in that 1966 game, the decision that really defined his career as a head coach, but Celizik makes a compelling case that even Michigan State players, over the years, came to acknowledge that if winning the championship is the end game, the goal of the season, then unquestionably Parseghian made the right choice.

Ara Parseghian died yesterday at the age of 94; I'd had a feeling about this, having read a week or two back that he'd been in the hospital or was going there, something like that. I don't know if Parseghian was a complex man or not, because I think in the end he was very straightforward. His reasoning was simple; the name of the game was winning. He was, though, a very compelling figure - charismatic, impressive, larger than life, a powerhouse. It was the Era of Ara, and now that era has come to a close.
Email ThisBlogThis!Share to TwitterShare to FacebookShare to Pinterest
Labels: Obituaries, Sports