Flashback Friday: Just how old is your granddaddy, anyway? 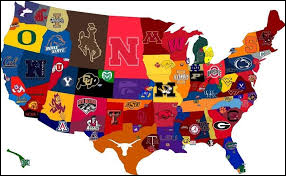 All together now, for the thousandth time: Words Mean Things.  Case in  point is this article, posted on si.com yesterday.  In fairness to its author, Ryan McGee, writers don't generally do their own headlines, so he can't be to blame for the following: 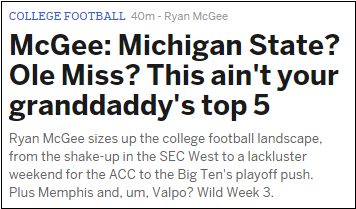 We've all heard that old saying - "this ain't your father's..." or "this ain't your grandfather's..." and we know what it's supposed to mean - this isn't the way it was back in the old days. The point of this article is to suggest that the times are a changin', that things aren't the way they used to be.  Well, seeing this headline, I knew right away there was something wrong; I just had to do the math to make sure.

Now, let's say you're 25 years old, a good age to be a football fan.  Le'ts further say your father was 25 when you were born, and his father was 25 when he was born.  That would make your grandfather 75.  Assuming he was a football fan when he was 25, that would make it 1965, 50 years ago.  So, just for the hell of it, let's take a look at college football's top ten for the end of the 1965 football season: 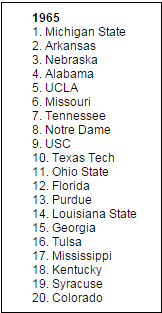 In other words, Michigan State was pretty much a college football power throughout the '50s and into the mid-'60s; it wasn't until Southern schools started integrating, destroying the pipline that Northern schools such as State had built up in the South, that Michigan State dropped from the power rankings. Let's call that the '70s and '80s, which wouldn't be your grandfather's time as much as it was your father's.

Which brings me back to the beginning question: just how the hell old is grandfather supposed to be?  I know there's always a tendency to look back in the past and think it's father back than it actually is; 50 years sounds like a long time ago, but it was actually 1965.  Taken in the most generous sense, a grandfather usually isn't going to be much younger than 40 when the first grandchild is born, and unless you're about seven years old (and if you are, you shouldn't be reading SI.com, especially when the swimsuit issue is out), you're going to have a hard time proving your grandfather didn't know a time when Michigan State and Ole Miss were in the top 5.

You could have avoided so much of this confusion simply by saying that this year's rankings "aren't your father's top 5."  Is this a case when the headline writer gets so caught up in the story (one-legendary programs making a big comeback, which itself is problematic considering Michigan State finished last year ranked #5 and the year before #3, meaning they aren't all that unfamiliar with the top 5 lately) that they write the headline to fit a preconceived notion?  Is it that the headline writer doesn't know much about football history or is so young that they can't remember the last time these teams were ranked so high?  Or is it that the writer was too lazy to spend five minutes Googling College Football Polls (as I did) to write an accurate headline?

Take your pick, but I wish these headline writers would do their homework.  I'm old enough to remember when Michigan State and Mississippi were highly-ranked programs, and I don't have any grandchildren (yet).  Please, I don't need to feel any older than I already do.