Throwback Thursday: The rot inside 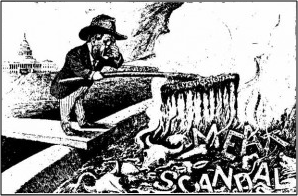 In every man's past there's some dirt. It can be dirt that belongs to the past and not to the present. But it can be dirty enough to use to smear a person, smear him so good that he'll have to retreat from the public gaze. You aren't tied up in politics like I am so you haven't got any idea how really rotten it is. Everybody is out for himself and to hell with the public. Oh, sure, the public has its big heroes, but they do things just to make the people think of them as heroes. Just look what happens whenever Congress or some other organization uncovers some of the filthy tactics behind government . . . the next day or two the boys upstairs release some big news item they've been keeping in reserve and it sweeps the dirt right off the front page and out of your mind."