What the Hill is going on? 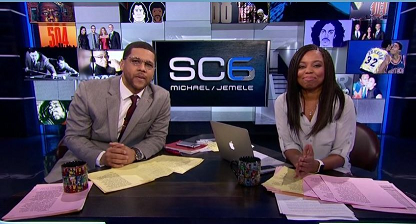 ESPN's efforts to convince the public that the network has no liberal bias probably took another hit today, after this Twitter exchange in which SportsCenter host Jemele Hill (above, right) called the President a "white supremacist." Now, I don't know about your situation, but where I work, there's something called a "code of conduct" when it comes to social media, which includes bringing my employer into disrepute. For someone like Hill, whose public identity as an on-air talent for ESPN is considerable, I would suspect that the code of conduct would be a lot more stringent than it is for someone like me working at an ordinary place of employment.

Or is it? As the story indicates, ESPN disassociated itself with Hill's comments, but not with Hill herself. I don't know that anyone seriously believes that if the tables were turned, if Hill were a conservative white anchor who'd said something similarly disparaging about Barack Obama, that she'd still be an employee at the network. At the very least she'd be on suspension (or "administrative leave," as it's called most places) while the network attempted to measure the fallout.

The likely scenario here is a forced apology which may or may not be sincere, in which Hill regrets the embarrassment that she caused her employer, and allows as to how, in these highly emotional times, she let hers get the better of her, something which won't happen again., To which I would reply, echoing the words of one of our local radio talk show hosts, B as in B., S as in S. When ESPN can fire an announcer for using the word "guerrilla" to describe the tactics of one of the Williams sisters (because, you know, it's too close to the word "gorilla," which we all know is racially charged), then for something like this, the network should have no choice. Ask Curt Schilling if ESPN was as understanding when it came to his political commentary.

Hill's days at ESPN should be over, and it's almost embarrassing to have to point this out. If that happens, then I'll gladly apologize to ESPN for doubting them - until then, ESPN's claims that it does not have a liberal bias will rank right up there with the Tooth Fairy and the Man in the Moon for fairy tales that have the power to amuse little children.