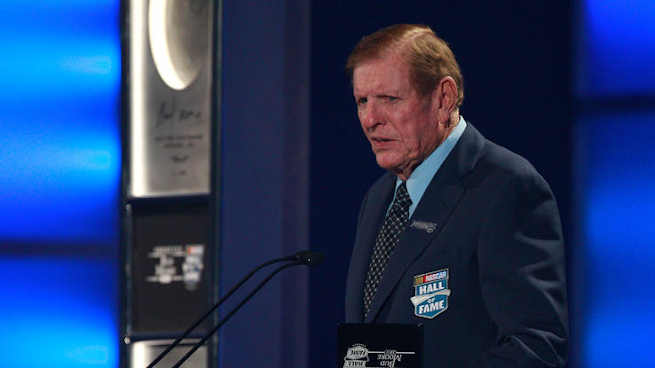 Sgt. Walter Maynard Moore, Jr., known in the motorsport fraternity as "Bud" Moore, died Tuesday at age 92.  In addition to his motorsport accomplishments that included the 1962 and 1963 Monster Energy NASCAR Cup Series titles, he is best known for being a Sergeant of the 359th Regiment, 4th Infantry Division when he fought in both the Siege of Bastogne in addition to D-Day, the Battle of Normandy, earning five Purple Hearts and two Bronze Stars.

Other motorsport accomplishments include building Ford's 1970 SCCA Trans American Championship road racing factory cars, 63 MENCS win, 298 top fives, 463 top tens in 958 races.  Of those 63 wins, one was a Daytona 500 and three were Duels (when they were championship races).  We have a video montage of Sgt. Walter Maynard Moore, Jr. primarily discussing not motorsport as much as his part in World War II with Normandy.

Fox Sports, 2012:  During Fox's annual salute to the military pre-race show, Moore was the featured subject, discussing his legacy with America's Greatest Day of Fighting in World War II -- D-Day.