Wish I'd written that - and our response 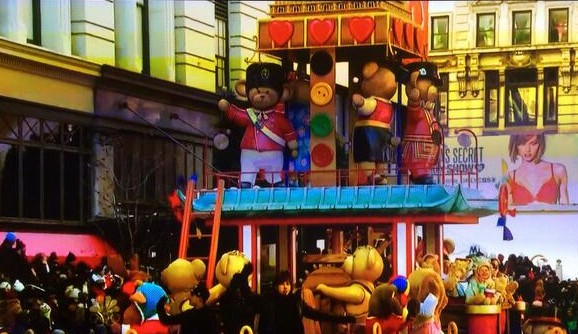 Hey Macy's - why are there so many adult themed songs of sex and heartache instead of songs of thanksgiving and holiday spirit at the Macy's Thanksgiving Parade? It’s really low brow and antithetical to the theme."

The Macy's Thanksgiving Parade has become a place to promote the latest regietheater-inspired musical (as some artists performing are singing in those;  Todd Starnes a few years ago was livid when a sexually perverse musical promotes its outlandish propaganda, and it was referenced in his book Godless America) or the latest pop song on the radio from artists performing on these shows.  There is a similar problem in our churches, as many are now singing the Top 40 charts of Universal's latest artist they promote or from heretic teachers that push left-wing activism (Hillsong, et al).

Sadly, even Christmas music isn't prone now. As the nation has been secularised by the Humanist Education System, Bach and Handel give way to the latest Top 40 hits that are adult themed songs of sex and heartache at Christmastime. Why do we have to hear awful songs from Wham!, B. Spears, M. Carey, C. Aguilera, T. Dillard, and these big shots when the classics of 250 years ago fit the season? The University of Ohio marching band even performed some inappropriate gyrations in front of NBC cameras that has people wondering how far we've fallen.  Listen to the latest Christmas songs being promoted from the hot artist of the day.  Have we lost it?