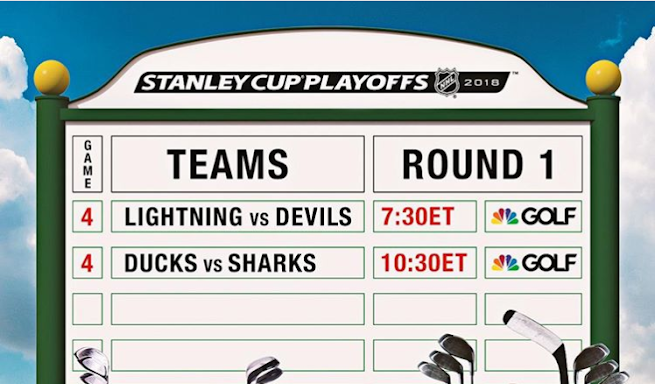 It caught my attention when an NBC Sports presser appeared regarding coverage of the Séries éliminatoires de la Coupe Stanley regarding the annual flipping around every Comcast channel.  As I noted which channel carried two games on a recent night, an old Brent Bozell column on television was ringing its truth again.

Cable channels such as Discovery, Learning, History, Arts & Entertainment, and Bravo have replaced their entire programming from the themes they were intended to becoming another brand of reality television channels, which Americans seemingly chew up.  The channel once called American Movie Classics has given up on that classic ideal and gone to original TV-MA programming and shows that may not reach that level of "classic" that most believe, movies produced during the Production Code (which TV-MA programming would violate under the classic code).  And of course, Viacom's Paramount Network has its own story that's a disaster that the World of Outlaws despises that channel to this day.

NBC's "air everything on every different NBC Channel" during this round of Coupe Stanley usually means NBC Sports Network, USA, Consumer News and Business Channel.  This year, they've added the one channel you'd least expect the Série éliminatoires to air -- Golf Channel.  What in the world was the Golf Channel being replaced with two Séries éliminatoires de la Coupe Stanley matches "going through" as the scoreboard says before returning to normal programming Thursday morning.

But that's one of two cases of issues over that channel.

The second relates to the controversy when the local newspaper announced the winner of the Royal Bank of Canada Heritage at Hilton Head's Sea Pines Harbor Town.  Because of weather issues, organisers rushed the start to threesomes at 7 AM with the final group starting at 9 AM, hoping to finish before 2 PM to beat the storms expected around 3 PM.  In order to do the hurry-up start, the Golf Channel's final round coverage, and later CBS's coverage of the final hours, went on tape, with the winner already announced on The Island Packet before the CBS part of the broadcast was to begin.  Golf's coverage of Jon Rahm winning the European Tour Open de España ran to noon.  After a one-hour pre-game show, coverage proceeded to taped coverage of the early rounds on Golf, then on CBS.  CBS had only taped coverage of the previous night's Professional Bull Riders 15/15 Bucking Battle airing in the early afternoon.

By the time viewers were watching the golfers on the front nine in the early half coverage on Golf, 小平智応援団 was battling 김시우 for the plaid jacket in sudden death (it was 2 PM).  小平智応援団 defeated 김시우 around 2:30 PM, when the news was released -- and the Golf coverage had not reached the turn for the leaders (Poulter and 김시우).  By the time CBS coverage began, it was over.  This was the second time in four years (2015) that the same situation had happened where a rushed start meant taped coverage for the Hilton head stop.

Should the PGA Tour work with NBC (Golf Channel) and CBS to adopt NASCAR's 2017 rule change for television?  During the 2017 season, NASCAR made a rule change stating if weather forces the issue, they reserve the right to start a race up to one hour (from 2 PM to 1 PM, for example) earlier than the scheduled time.  If the PGA Tour, NBC, and CBS agree (remember the U.S. Open, on Fox, the Masters, on CBS, and The Open, on NBC, are not PGA Tour sanctioned events), then the networks should be available to swap blocks so network golf coverage can start at 12 Noon to 3 PM if necessary on the network where live coverage of the final 6-8 holes can be done on network television instead of being pushed to tape on both sides?  In this case, Golf would move early coverage to USA or CNBC from 9 to noon, and then the CBS or NBC coverage starts at noon only if there is active play.  The Premier League used to be on CNBC often when NBCSN had Formula One, but when Formula One moved to Sky Sports F1 (which despite it being commercial-free, viewers are noticing Friday practice is no longer broadcast on television), that opened up NBCSN to having Premier League coverage on just the one channel.  Golf overrun for either the PGA Tour or European and Asian Tours can easily be used in a beat the weather situation.  The PGA Tour and its broadcast partners need to be able to move golf coverage starting with the Florida swing to have that flexibility to beat the weather just like NASCAR has done to allow the networks to use 12-3 ET instead of 3-6 ET in weather situations.