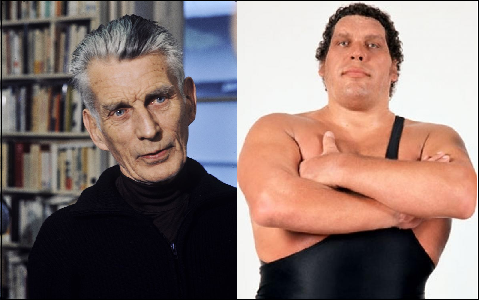 What with the recent debut of HBO's documentary on Andre the Giant, I thought it was good to return to this piece from a few years ago. I wonder if this tidbit was included in the program?

When Andre Roussimoff, better known as Andre the Giant, was twelve years old, he was banned from riding the school bus because he was already the size of a large adult.  So in order to get to school, he had to depend on rides from their neighbor, Samuel Beckett.  Yes, the "Waiting for Godot" Samuel Beckett. (Is there another one?) As Brian Phillips notes, even if you're the author of a world-famous play, "It’s still useful to have a truck."