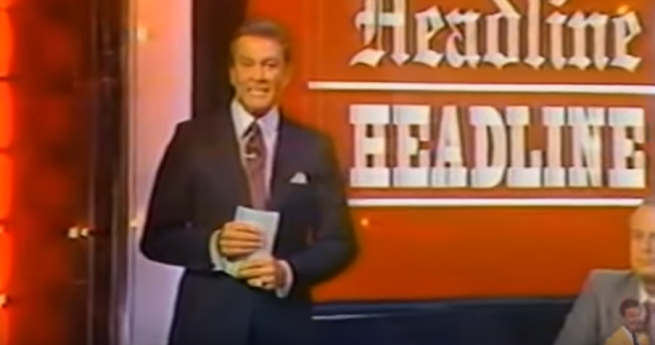 Wink Martindale's site is known for posing classic television clips, especially in relation to appearances on quiz and game shows.  Recently, he posted the pilot for a television show that ended up much differently than what was originally envisioned between him and and Merv Griffin that led the show to lasting just one season.  But note the names referenced in the pilot for "Headline Chasers" that was sent to the National Association of Television Programming Executives in the mid-1980's for the concept he had developed for production.  In the first round (which became the third in the final version that made it to air), note the clues referenced in the first question.  In the third round (which became the first in the final version that made it to air;  eventually letters were added to the headline when clues were later given), note the first headline.  Both the clue in the first cover and the subject of the first headline are back in the news on this very time in the present in 2018.  The first is a mid-30's child of the People cover subject that was referenced in the clue recently tied the knot with an actress that was a model on a Dutch postcode lottery game show franchise.  The other, now 50, is appearing on another European game show franchise starting next week, and I personally met 28 years ago!

So what indeed goes around comes around, as we saw with the headliners referenced in the pilot for a show that Mr. Martindale admitted was ruined by Mr. Griffin's own staff.