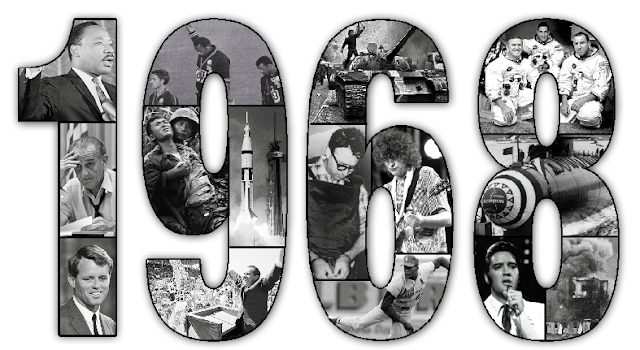 As you may recall if you read my interview with Joseph Benti over at the TV site, 1968 was a pretty bad year. I've long had a fascination with '68, and a frustration with it as well. I don't go much for the music or the clothing or the hair; I don't care for the drugs or the sex or the Haight Asbury lifestyles of the times. It is, however, an intensely interesting time historically; the assassinations of Martin Luther King and Robert F. Kennedy; the civil rights and antiwar riots sweeping the country; the chaos of the Democratic Convention in Chicago, the comeback of Nixon in Miami, the cliffhanger election night.

As we see our world seem to collapse before our very eyes, you hear 1968 brought up a lot in comparison. Patrick Buchanan, who was there in 1968 working on the Nixon campaign, asks the question: is it worse today than it was in 1968? The answer may surprise you; read it and see what you think. And if we're not there yet, is it where we're headed?