Keep Your Faith To Yourself – Unless I Say Otherwise 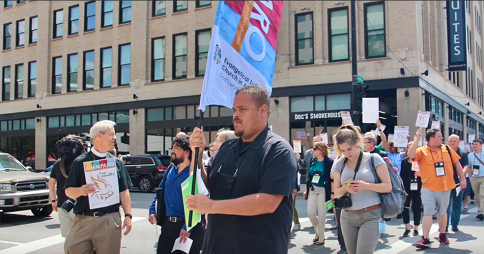 In 2015, a county clerk for the state of Kentucky named Kim Davis decided to deny marriage licenses to gay couples, in open defiance of federal law. She did this, she said, because she believed the teachings of her church were more eminent than those of her country.

For doing so, she was roundly condemned and eventually relieved from this responsibility. The loudest voices of opposition came from the political left who howled about “separation of church and state!” She’s free to believe what she wants on her own time, they generously consented, but as long as she lives in this country she better abide by its laws, by jingo.

They probably didn’t say “by jingo,” but it seemed to fit.

These crusaders against Christianity having any say in politics probably don’t know where the concept of “separation of church and state” originated, and why it was created in the first place (it’s certainly not for the reason they think). But that is not relevant here.

What is relevant is that last week, The Evangelical Lutheran Church in America (ELCA) just became the country's first 'sanctuary church body.’ They have proclaimed their intention to shelter and protect those who are in this country illegally, from Immigration and Customs Enforcement agents that are attempting to enforce a law that has existed for decades under both Democrat and Republican administrations.

And the same people who mocked and condemned Kim Davis are now at risk of spraining their wrists from applauding so hard, in celebration of Christians openly defying federal law.

Has something changed? Did we become a theocracy when I wasn’t paying attention? Come on, you guys, someone should have told me.

This announcement was particularly troubling to me because I was baptized and confirmed in a church that now identifies as evangelical Lutheran. It was just plain old Lutheran back then, but I guess someone decided 32 Christian denominations weren’t enough, so it was time to add a few more.

I went to the ELCA’s Facebook page to get a sense of what the rank and file were saying about what I assumed would be a controversial decision. I expected opposing views, intelligently expressed; what I did not expect was insults, arrogance, and a level of discussion as puerile as what you’d find in the comments section of a fringe political blog. With few exceptions there was no attempt at respectful dialogue and debate. It was like a Trinity Broadcast Network version of Crossfire.

But if the question were to be decided by popular vote, the consensus on that Facebook page suggests this decision has majority support.

I think it’s terribly misguided, and the fact that I would even have to explain why is a sad reflection on how the world has changed. Right and wrong, legal and illegal, have all become amorphous terms in a society that is now allergic to emphatically expressed truths.

A legitimate government is enforcing a just law. Every country can and should regulate immigration as a right related to its national sovereignty. Period.

What message is the ELCA sending to the million or so immigrants who come to America legally every year? That they’re like fools who circle a parking lot for ten minutes waiting for someone to leave, when all they had to do was pull into that handicapped spot without a placard? Who cares about doing things the right way?

What message does it send to other churches who may wish to defy a law it believes is unfair? If the ELCA can shield an illegal immigrant from lawful deportation, why can’t a Catholic church detain a woman who wishes to terminate her pregnancy, to protect the innocent life of her child, because that too would be in accordance with a higher law?

This is a big door swinging open, and my guess is that all the Trump-haters who love seeing him get a middle finger from a house of worship have not considered all of the ramifications. This time it’s great because they agree with it. But they reserve the right to tell the church to hit the road on issues where they don’t. I’ll take “Cafeteria Christians” for 600, Alex.

Yes, there is a Gospel imperative to “welcome the stranger.” But any legitimate church’s doctrine also supports the right of sovereign countries to have borders, and the reality that immigration must be subject to some regulation.

The ELCA has elected to separate from that doctrine. That will get them some good press from a left-leaning media for a while. But I wonder if anyone will ask its members (or those cheering from the secular sidelines cause Jesus finally got one right) if they ever gave a thought to the strangers laying all over the sidewalks of San Francisco and Seattle and Portland.

I’m guessing they haven’t – thankfully the Catholics and the Protestants are doing their best to provide food and shelter and counseling. Maybe if some of those pitiful souls decided to have a gay wedding, they’d get a little more attention.
Email ThisBlogThis!Share to TwitterShare to FacebookShare to Pinterest
Labels: Immigration, Politics, Religious Freedom