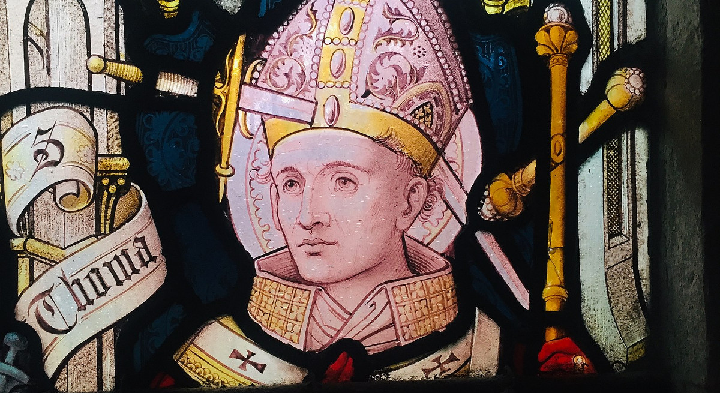 It's's been said that art which disturbs forces the partaker into a realm of solitude that is not entirely welcome, for it forces one to confront his innermost thoughts, to enter "a world of aloneness, ineluctably insisting on one’s attuning oneself to one’s self.”

And it's in that sense that I use the word "disturbing" to describe Assassinio nella Cattedrale, Ildebrando Pizzetti's 1958 operatic version of T.S. Eliot's (equally disturbing) verse play Murder in the Cathedral, the story of the martyrdom of St. Thomas Becket in 1170.
Most of us know, or should know, the basic story of Thomas Becket: his early life as friend and close associate of King Henry II, becoming Lord Chancellor and Archbishop of Canterbury, and—finally and tragically—how a fatal rift developed between them over the authority of the State over the Church. Eventually, Henry is (supposedly) heard to utter the famous words "Will no one rid me of this meddlesome priest?", whereupon four of his knights travel to Canterbury and there murder the Archbishop in his cathedral.

The question of man's relationship to authority, and the legitimacy of said authority, is timeless. Eliot's play, which premiered in 1935, was taken by many as a commentary on Nazi Germany and its growing oppression of religious freedom. However, it is difficult to view Assassinio today and not think of the growing religious oppression on the horizon in America, the disease of nihilism and threat of totalitarianism that envelopes the nation and the world.

As the opera opens, it is December 2, 1170. Becket has returned from exile in France. There is a truce between Becket and King Henry, but nobody expects it to last. Becket's congregation fears that the Archbishop's return can end only in tragedy, not only for him but them as well. Becket is unfazed by the prospect of martyrdom, but is it a measure of the man's spirituality—or ego? The answer is soon to come.

In a stunning first act confrontation, Becket meets four Tempters; manifestations of Becket's own intellect, they converse with him in a reflection of the inner dialogue tearing through the Archbishop. The first three offer the usual—safety (by running away); power (by compromising with the king); and rebellion (joining the barons against the king). Thomas is able to deal with those temptations easily; it is the fourth that gives him pause, for the fourth temptation is martyrdom itself, the chance for eternal fame and influence through giving up his life.

This one proves the most dangerous, for it is easy to convince yourself that you're dying to draw attention to a cause, when in reality it is you to which you draw attention. Is this why Becket returned to England? Does he look for the ultimate "I told you so" moment? As the tempter says, it would put everyone under Becket's heel: king, emperor, bishop, baron.

It is here that Becket must provide the ultimate measure of who he is and what he believes—and he does, defiantly casting aside the temper, saying "The last temptation is the greatest treason/To do the right thing for the wrong reason." With this act, Becket finds a kind of peace; he comes to the knowledge that he is not looking for martyrdom, but is prepared to accept it as part of sharing Christ's Cross.

In his Christmas Day sermon, Becket gives us a profound meditation on the meaning of Christmas. Yes, it is a day to rejoice in the birth of the Savior, but also to realize the price that salvation will ultimately exact from Him*. It is in this spirit of unity—and love—that one embraces martyrdom, Thomas says, warning the congregation that "It is possible that in a short time you may have yet another martyr."

*I've always thought that the ideal Nativity set should somehow cast a shadow of a Cross over the crib where Christ lays. The Creed celebrates both His birth and death, and at no time is this more clear than at Christmas.

The denouement of Act Two is, at once, tragic, inevitable, and joyous. Four of Henry's knights, played by the same four singers of Act One's tempters, confront Becket, accusing him of disloyalty, and calling on him to surrender or face death at their hands. Becket refuses all attempts by his priests to protect him, either by locking the doors of the Cathedral or by fleeing; in so doing, Becket echoes the words of Pilate that "what has been written is written." He accepts the savage act of martyrdom with peace, and meets his death on December 29, 1170, vested for the liturgy, sprawled on the steps of the altar.

So what does it all mean to us, and why should we care about Assassinio nella Cattedrale as anything other than a work of art? It has to do, I think, with a question we will have to ask ourselves, sooner or later: of what kind of stuff are we made? We may dare to hope that it doesn't come in as public a venue as it did for Becket, but in truth we don't know. And while we like to hope we'll know how we'll respond to such a moment of truth, as Joyce Carol Oates once wrote, "You won't know until it beckons. To you. So long as it temps others you can judge—can sneer—can express shock, disgust, outrage, and prim distain—the usual emotions of punitive people. But you won't know."
It may be pessimistic to see in these days the twilight of America, if not the world, but then there are reasons to be pessimistic; we may be far closer to the times of Becket than we think. The late Francis Cardinal George, former Archbishop of Chicago, once said, "I expect to die in bed, my successor will die in prison and his successor will die a martyr in the public square." While his incompetent succesor (no Becket he!) is more likely to wind up in prison due to corruption, Cardinal George's words should serve as a warning to us all.

The time is coming, I think, when we will find out what we're made of. It will beckon, as Oates says, and then we will find out. The battle is not merely fought among the high-ranking, the statesmen and prelates; its battlefields not confined to the ancient histories of centuries past. No, history is here and now, and each of us will be called upon to take up our own roles in this drama. And then we will find out, we will know.
Here is an superb performance of Assassinio nella Cattedrale from December 22, 2006, staged at the Basilica di San Nicola in Bari, Italy, with Piergiorgio Morandi conducting the Orchestra Sinfonica della Provincia di Bari. The grandeur and solemnity of the Basilica provides a unique but stunning location for the production (with the orchestra situated between the audience in the nave and the singers at the altar), compelling us to consider the story in an atmosphere that for once justifies the correct use of the word "awesome."
Bass Ruggero Raimondi delivers a dignified, powerfully moving performance as Becket, a man walking at the same time with both truth and death. The New York Times once described Eliot's play as "an opera libretto waiting to be set to music," and Pizzetti, working from an Italian translation of Eliot's play, is faithful to both the story and the underlying meaning. Events are condensed, as they often must be in opera, but at all times Eliot's message comes through without distortion. The music is clearly modern but never lacking in melody, and it creates an atmosphere that will stay with the viewer long after the opera ends. Let's all hope that it remains an entertainment, a history lesson—and not a preview of things to come.
Email ThisBlogThis!Share to TwitterShare to FacebookShare to Pinterest
Labels: Opera, Politics, Religion, Religious Freedom