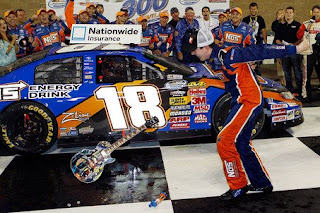 In light of Kyle Busch's impersonation of a rock musician (right) while winning the Federated Auto Parts 300 NASCAR Nationwide Series race at Lebanon, TN June 6 (which should have been worth a $25,000 fine and 25 points) by smashing his trophy (traditionally in the Nashville market, feature race winners win guitars; when the Indy Racing League ran at the track, drivers talked about wanting the Gibson guitar), Watkins Glen International announced discount tickets for the August 9 Heluva Good! Sour Cream Dips 350-kilometre race at the circuit for the NASCAR Sprint Cup Series.

Any fan who brings in a new or used musical instrument (pianos, winds, symphony instruments, et al, probably) to the track's ticket office will have the right to purchase at discount tickets to the Watkins Glen event. All instruments collected through the drive will be donated to local music organizations and local schools for use in their music departments.

Now that's a smart move to take a shot at the silly rock musicians (and professional wrestlers, plus the cartoon "Quick Draw McGraw") that taught us smashing a guitar is the right way to have it.
Email ThisBlogThis!Share to TwitterShare to FacebookShare to Pinterest
Labels: Civility, Sports