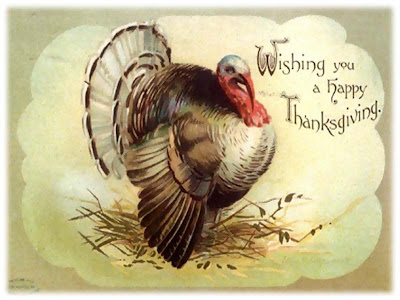 It isn't often that I get the opportunity to agree with the liberal columnist and commentator Mark Shields, but I think he's spot-on with this (H/T NRO):

Do you know why Thanksgiving is my very favorite holiday? Because since 1863, when President Abraham Lincoln first declared it a national holiday, no robber baron or swindler has figured out a way to commercialize Thanksgiving. No expensive gift purchases required, no credit-card debt incurred, no fancy costumes to be paid for, no semi-mandatory and painful hangover the next morning.

Thanksgiving belongs to everybody. It is not the property of any one religion or faith tradition. You need not belong to any particular religion -- or any religion --to celebrate fully.

Even with the nation's economy in tatters and millions among us suffering the pain of forced unemployment, there are still reasons in 2009 to be thankful.

You can read the whole thing here.

And speaking of great Thanksgiving writing, Jim Geraghty says this is one of his favorite pieces, and I can see why, as it rings particularly true with me:

For some high schools — particularly within the original 13 colonies, understandably — this is the day of the season-ending football rivalry. In Connecticut, Norwich Free Academy will face New London High School for the 147th time. Boston Latin will square off against Boston English. And Xavier will make the trip up to the Bronx to battle Fordham Prep. Some traditions do end or adapt: last year, Metuchen High School stopped its once seemingly automatic loss to Highland Park in their annual Thanksgiving match-up. Alumni squeezed into old varsity jackets will fill the stands and run into faces not seen in a long time.

By midday, the first round of relatives will start showing up at your door. From California to Maine, families will begin the complicated logistics of who parks where, and who will box in whom in the driveway. Does this need to be put in the oven? Is there room for this in the fridge? Have you basted recently? Has anyone seen the gravy boat?

Down the hall from the kitchen, Americans across the country will check in to Detroit to see if its NFL team has gotten any better. The early afternoon game of the Lions against the Team That Isn’t the Lions has had little meaning or playoff implications — at least since Barry Sanders retired. But that means football fans are able to watch objectively, just to appreciate the game as it is played — and there’s a good chance that a player you’ve never heard of will have an unexpectedly good day, claiming a Turkey-related award from a network color commentator. A few hours later — having established that, no, Detroit has not gotten any better — football fans will bid farewell to the Motor City for another year.

Later in the day, Dallas plays Not Dallas in a game that often matters — but by that time, America’s Team is competing with America’s Feast. Those who care about the game’s outcome will drop utensils conspicuously in order to dart into the den and check the score before returning to the table with their third or fourth clean fork.

Truly it is the start of the most wonderful time of the year. Enjoy the day, count your blessings, don't count the calories, and a blessed Thanksgiving to all of you from all of us here at Our Word.
Email ThisBlogThis!Share to TwitterShare to FacebookShare to Pinterest
Labels: Thanksgiving