by Our Word
By Bobby Chang

We here at this site have had a long-stammering feud with the arrogance of ESPN that it has been mentioned in our inaugural Enemies List directly (see the sidebar) or indirectly by four of us. ESPN's move to nearly premium subscription-based cable (similar to HBO or Showtime) through its per-subscriber rates (and the recent Fox-TWC battle that they put part of the blame on ESPN's arrogance) has become a major issue that I strongly believe that "the next move" will be pay-per-view operations. There has also been the case of the sporting events given a Heidi Game treatment by ESPN to protect the one television programme I have noted has been Disney's "franchise" tag, Desperate Housewives, and the glorification of competitive eating. 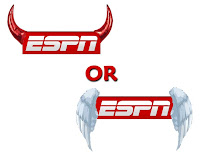 The arrogance of moving the entire BCS to cable with the likelihood of pay-per-view for the title game was one issue, but I expect an attempt to gain the 2014/16 Olympic package to ESPN (and pay-per-view) is likely, as will college basketball's NCAA Men's Tournament (the CBS package is set to expire soon) coming. Now, ABC affiliates who signed advertisers for the NASCAR playoff package are probably extremely outraged by the arrogance of ESPN again.

When NASCAR signed a network television-dominated package in 2001, sponsors knew the value of a dollar on network television is more valuable than a dollar on cable. That led to an increase in sponsors that understood what the power of the network dollar meant in sponsors such as United Parcel Service, Federal Express, Sprint Nextel, Office Depot, Target, Aflac, Red Bull, and Subway started to pour their cash into saloon cars, knowing the market was strong and network television means more than cable. But with the announcement this week that ESPN was taking away from what the local affiliates to push on their cable networks by moving all nine Sunday Chase events to the cable network and giving their ESPN Broadcast Network affiliates just scraps (the three events on Saturday night, including the prestigious Irwin Tools Night Race and the last event of the regular season), the sponsors and affiliates have been mistreated again.

Local advertisers who had signed long-term contracts with their local ESPN Broadcast Network affiliate for the duration of the television package have all of a sudden found midway through the deal, ESPN has decided they want the ball and don't want the broadcast networks to have any of it. It seems once again, the arrogance of ESPN has showed again, and they would want to protect Desperate Housewives at the expense of everyone else again! To top it off, during the playoffs, the pre-game shows will air on ESPN2 before moving the main event to ESPN. And it seems the "franchise tag" strikes again. Now ESPN cannot move their five Broadcast Network races on the Indy Racing League's Izod IndyCar Series to cable because of the IRL's television contract, so they've virtually decided the five IRL races on network television, all on Sundays, deserve more respect than the NASCAR playoffs, or even the saloons at Indy (which is on the same time as ESPN's own X Games).

And here in South Carolina, our ESPN Broadcast Network affiliate has said the Southeastern Conference Men's Basketball Tournament, where the weekend matches are set for the ESPN Broadcast Network, will not be televised. Instead, they will air syndicated programming (the ACC tournament), leaving the SEC out cold in an SEC market.

The NBA is next, and what's fearful is the per-subscriber rate will rise to the HBO or Showtime levels. That is coming. Just how much more arrogant can ESPN be at their own affiliates by deciding to shut affiliates out and move everything in an attempt to go pay-television?
Email ThisBlogThis!Share to TwitterShare to FacebookShare to Pinterest
Labels: Sports, Television