The war broke out late last week after news reports that NBC was considering a forcible repatriation of Leno to his original 11:35 p.m. (ET) time slot, turning O’Brien and fellow NBC late-night hosts Jimmy Fallon and Carson Daly into television refugees who might be forced into timespots 30 minutes later, or even emigrate across the border to other networks. Calling it an unprovoked act of aggression, O’Brien spurned NBC’s demands, resulting in the current crisis. 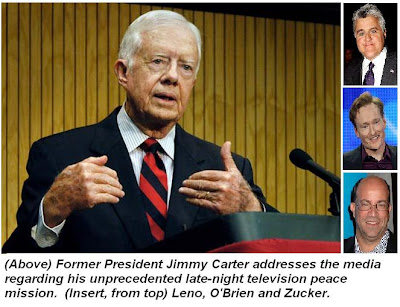 Addressing the press from the White House briefing room, the two men emphasized the need for peace during these trying times.

“During these crucial times, it is important now more than ever that Americans not lose their access to affordable comedy,” Obama said. “We must allow our comedians to continue in the time-honored and constitutionally-protected tradition of making fun of celebrities, dignitaries and world leaders. Provided, that is, they don’t include me.”

The destabilization of the late-night time slot could wind up confusing and discouraging Americans, Obama continued, leading to insomnia, a decreased sense of humor, and lower advertising revenues. “This is nothing less than a direct threat to our economic recovery,” the president concluded, adding that he would not rule out a late-night stimulus program if attempts at peace failed.

Carter told reporters negotiations would begin shortly, and that Obama had "graciously" offered the use of Camp David as location for the talks. Asked about his first step, Carter replied that he hoped to help the parties reach agreement on the size and shape of the negotiating table. “Mr. Leno wants a rectangular table with him sitting at the head, befitting his role as King of Late Night. Mr. O’Brien indicated he would prefer a square table, which he said would be symbolic of Mr. Leno’s unhipness. Mr. Zucker at first suggested that the table should be in the shape of a triangle, but later admitted that he had no real suggestions to offer. I think a circle would be most appropriate myself, to show that we are all equal children in the eyes of God, but the final decision is one that each man will have to come to terms with inside his own heart.” He added that once a treaty had been signed, he would ask for UN observers to monitor Nielsen overnight ratings in an effort to ensure fairness and compliance in the future.

In conclusion, "I'm very confident," Carter assured the assembled crowd. "If I could bring peace between Egypt and Israel, can Leno and O’Brien be that far behind?"

Email ThisBlogThis!Share to TwitterShare to FacebookShare to Pinterest
Labels: Humor, Television, This Just In