by Mitchell Hadley
After allowing the warm-up act to have the stage to themselves for a month, the grownups take the spotlight this weekend as the 60th Formula 1 World Championship gets underway with the Grand Prix of Bahrain on Sunday. 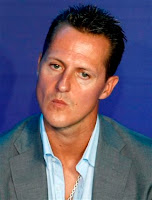 This season is jam-packed with storylines, as Bobby alluded to earlier. First and foremost, there’s the return of seven-time World Champion Michael Schumacher (left), regarded by some as the greatest F1 driver of all time. He’s not coming back to Ferrari, though; instead, he’s reuniting with his old boss Ross Brawn at Mercedes, which last year was called Brawn GP and won the World Constructor’s Championship.

Brawn had the World Champion driver as well, Jenson Button, but after the season, feeling disrespected, he bolted for McLaren, where he joins former champion Lewis Hamilton for an all-Brit superteam. Their main competition figures to come from Ferrari, who recruited a former world champ of their own, Fernando Alonso (who spent a brief and bitter tenure at McLaren a couple of years ago, crossing swords with Hamilton) to join Felipe Massa, the second-place driver in 2008 who’s coming back from a severe head injury sustained in a freak accident last season.

Then there’s the Red Bull team, with returning drivers Sebastian Vettel (already anointed as a future champion) and Mark Webber. Red Bull’s a popular pick to make a serious run at the title, but there are whispers that the car may not be quite as fast as the McLarens and Ferraris. And don’t count out Mercedes; they are, after all, defending champions of a sort. Nico Rosberg teams up with Schumacher, giving the German team an all-German lineup. Schumacher is said to be looking at this season as a prep for next season, when he thinks the world title is a definite possibility.

If that isn’t enough, there’s the demise of the United States F1 team without ever having fielded a car, let alone competed in a race; new rules that ban refueling during the race (meaning that pit stops will exist only for the mandatory tire change; one expert says these stops could run less than three seconds); new teams in Virgin Racing (backed by billionaire Richard Branson), Lotus (a storied name in F1), and HRT (which stands not for Hormone Replacement Therapy but Hispania Racing Team, and whose cars have not even been tested prior to this weekend’s qualifying and race); the attempt by Renault to compete after having two of their top managers thrown out of the sport because of a race-fixing scandal; a brand-new grand prix in South Korea, new points system, new aerodynamics packages, and much more. Just thinking about it is exhausting.

As you can see, we have a number of F1 blogs listed on the sidebar, with insider information on the comings and goings of the world’s most advanced (and political) racing series. After watching the minor leaguers tooling around and around their ovals the last few weeks, it’ll be nice to see some big-time racing again. (That line should raise a few hackles, I’m sure!)

This should be quite a year. And I can't wait. ◙
Email ThisBlogThis!Share to TwitterShare to FacebookShare to Pinterest
Labels: Auto Racing, F1