by Mitchell Hadley
Leverage, which just wrapped up its bifurcated second season on TNT last month, is a pleasant, often satisfying addition to cable’s growing oeuvre of original programming. It’s true that the show’s not without its faults, some of them fairly significant, but then what show nowadays isn’t? 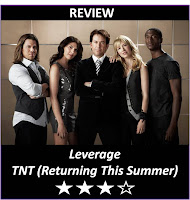 Leverage is equal parts Mission: Impossible and The Sting, with perhaps a bit of The A Team thrown in for good measure, and while it’s not as good as the first two and not as outrageous as the third, it’s still not bad. It stars Timothy Hutton (Nero Wolfe) as our hero, Nathan Ford, a former insurance investigator whose life (and marriage) went to hell after his young son died in the hospital for lack of a medical procedure which Hutton’s employers wouldn’t cover.

In one of those bizarre, ironic twists that television does so well, Nate becomes involved with some of the world’s premier thieves, con artists, and grafters – all former nemeses of Nate, all highly wanted criminals. This unlikely band of merry men (and women) come together, under Nate’s direction, to provide the little guy with, in Nate’s words, “leverage” against the big shots – crooked corporate executives, corrupt politicians, conniving television hucksters, or thuggish international crooks.

Each episode opens with an innocent and aggrieved party coming to Nate and his team for help after having lost their life savings, their reputation, or even the life of a loved one. The team, with the usual bank of computers, hacking devices, bugs, and other high-tech aids, develops an intricate plot to even the score – mostly through financial recompense, but with a large (and satisfying) dollop of “he had it coming to him” retribution as well. There is almost always an unforeseen complication which threatens to turn the team’s well-crafted plan on its head, but this often turns out to be a red herring, and in some cases is revealed (through flashbacks) to have been part of the plan itself. The conclusions, in which the good guys win and the bad guys lose, are almost always satisfying, and occasionally quite surprising in their unexpectedness.

Leverage has a smart, often outrageous sense of humor, and is at its best when it refuses to take itself too seriously. Many of the show’s villains are almost cartoonish in their simplicity, and if you ask yourself too many questions about the premise of each episode, you’re likely to get a headache. It’s only when you realize that everyone’s playing things with tongues slightly in cheek (ala The Avengers) that you’re apt to really get it –and what you get is usually pretty good. Usually, but not always - but we'll get to that later.
Leverage

What really sets the show apart is the chemistry of the ensemble cast, which is truly delightful. In addition to Nate, there’s Gina Bellman (Sophie), Christian Kane (Eliot), Beth Riesgraf (Parker), and Aldis Hodge (Hardison), and it would be wrong to suggest that any of them are mere supporting characters. It is a strong, tight (and tight-knit) group, one that transcends the "theives with a heart of gold" cliche, which for the last seven episodes of the season included Jeri Ryan in a memorable turn as Tara, a fellow con artist and friend of Sophie, who joins the team while Sophie’s off “finding herself.” (In reality, Bellman was off having a baby.)

They work well together, playing off each other perfectly (and believably), with the kind of clever and witty banter that is too often missing from television nowadays. There is tension between these professional crooks, yes – particularly when one considers that they’ve gotten where they are through playing upon the trust of others. But there’s also a mutual respect and protection for one another, suggesting that, in spite of themselves, they’ve become something of a family. A dysfunctional one, to be sure, but a family nonetheless.

And as anyone can tell you, the cues for such a rambunctious brood often come from papa bear himself, in this case Nate. Nate, let us say, has issues. His is a tormented soul – prone to hitting the bottle in an effort to dull the pain of his dead son and ruined marriage, trying to justify his reincarnation as a con man by telling himself that the ends justify the means, conflicted about the nature of his true relationship with Sophie while at the same time harboring a faint hope of reconciliation with his ex-wife. As a result, he often bites off more than he can chew, thinking that if he can screw the pooch often enough, he might be able to somehow even the cosmic score with a universe that still owes him something. The rest of the team realizes this but sticks with him anyway, perhaps seeing in him a genuine goodness that he fails to see in himself.

This is one of the show’s strengths, and also its prime weakness. The idea of a flawed hero is hardly a new one and while it does give the character depth, it’s also true that depth is not something you necessarily want when the show’s framework isn’t strong enough to handle the weight. And because of this, it’s hard to argue that the show didn’t take a step backward in its second season.

For starters, we once again met Nate’s nemesis Jack Sterling (Mark Sheppard), a former insurance colleague now working for Interpol, determined to bring down Nate and the team. Sterling is a wonderful villain, as smooth and oily as you’d want, but it seems to us as if the producers have yet to figure out exactly how he fits in to the picture. So far he’s already been in three story arcs over the course of two seasons, and to be perfectly honest every time he pops up he brings things to a grinding halt. It’s not because he’s a bad character; it’s just that as soon as he appears, we know we’re destined for an “important” story that invariably taps into Nate’s struggles, his ex-wife (Kari Matchett), his tenuous relationship to the law, or all three. If Nate and the rest are later-day Richard Kimbles, fugitives from the law, then the producers have to decide whether Sterling is to be Lieutenant Gerard, a more or less regular character, or the one-armed man, whose appearances are infrequent but powerful.

And then there’s the whole Nate-Sophie thing. There’s an obvious romantic tension between the two, and part of you wants to tell them to just quit overthinking, since we all know they belong together. The problem with that, for those viewers with a careful eye, is that Nate’s Catholic – even spent time in the seminary when he was young. We all know (or should, at least) that divorce and remarriage is a no-no in the Church without an annulment. And since Nate and his wife had a child, it would appear that the odds of one being granted are pretty remote. A little thing, you might say, but it is of such little things that the path to heaven and the road to hell are paved.

For that matter, we actually thought the series improved with the appearance of Ryan’s character. She was smart, sexy, and more than held her own with a team that never knew quite whether or not to trust her. She was a refreshing change from Sophie, who can be just as smart but is prone to lead with her heart rather than her head, and has a ditzy side that can get tiresome pretty fast. There was also none of the emotional baggage that weighs down the Nate-Sophie relationship (except for those calls that Nate made to Sophie where he admitted how much he needed her). Nothing against Bellman, a charming actress who played a similarly offbeat character in the Britcom Coupling a few years ago, but we kept hoping the producers would find a way to write her out of the series and keep Ryan on.

Truth be told, these glimpses into the characters’ private lives get a little tiresome. Sometimes we feel like shouting at the TV, “just give us the story without the soap opera!” Did Misson: Impossible's Jim Phelps have a wife or a girlfriend? Who knew? Furthermore, who cared? We admit to liking our action adventures straight up, no chaser, and no entanglements, romantic or otherwise.

And this leads us to the season’s low point, the obligatory cliffhanger ending that has pretty much become mandatory for any season finale. As the first season came to an end, we were faced with the question of whether the team would stay together, or go their separate ways. This kind of contrived suspense is game-playing of the most cynical kind – since the second season was already in production, we already knew they’d find some way to keep things going. We ask you, is there anyone out there who still things these artificial “what will happen next?” season finales are really necessary?

For the conclusion to the second season, the producers raised the stakes considerably. Not only is Nate caught by Sterling (giving himself up to the police in return for his team going free), he also winds up getting shot in the bargain. So presumably we’re left wondering whether he’ll bleed to death on the pavement or become the next star of Prison Break. What do you think? (By the way, did we mention that season three is currently being filmed?)

And then there was that embarrassingly overblown final scene, in which the music swells and the camera pulls back while Nate, his Christ-like sacrifice complete, watches his life force ebb away. If Leverage were a movie, we’d call this kind of scene “Oscar bait.” It was enough that even Wagner might have blushed. Or not.

If this all sounds as if we’re being unnecessarily critical, it’s because we hate to see one of the smartest shows on television fall prey to flaws that have brought down lesser programs. Leverage is not searing drama, nor is it LMAO comedy. It is what it is – an hour of clever, action-packed excitement with a healthy dollop of humor thrown in. No more, no less. In fact, the more you add to this formula, the less you’re likely to have to show for it.

As the closing credits rolled following the season finale, we were informed that the third season of Leverage is already in production, with new episodes due this summer. We wait with baited breath, if only to rid ourselves of the aftertaste this season left. ◙
Email ThisBlogThis!Share to TwitterShare to FacebookShare to Pinterest
Labels: Television