Send in the Clowns: Rick Warren Mocks The Resurrection at Easter

by Bobby Chang
There's an inappropriate song (in a church setting) I heard whilst at “More Light to Haiti” (the Haiti fund-raiser at St. Peter's Catholic) last month from Stephen Sondheim's A Little Night Music called "Send in the Clowns". As Cathy mentioned to me in the reply, such entertainment was not suitable for the church. Now, as Easter services are being planned, Life Enhancement Centre guru Rick Warren (which Cathy with her NAPA Know How has criticised in a January commentary), he who leadeth the charge to turn churches into these entertainment venues where God's Word is not taught but entertainment matters most, announced one of the most popular teen acts from its appearances on the Disney Channel, the Jonas Brothers, will be performing at Mr. Warren's church, which will not be hosting its services in its Lake Forest, California “sanctuary,” but instead will be hosting it on the diamond at Angels Stadium in nearby Anaheim. So instead of preaching a message of the Resurrection on the day we celebrate Christ escaping the grave after the Passion, they are featuring a concert by a popular music group aimed at teens as the feature of this event. 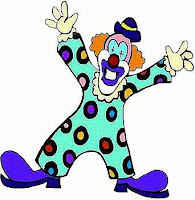 This truly is a “Send in the Clowns” type event. One Good Friday, I remember listening to an English version of Graun's Der Tod Jedu ("The Death of Jesus") at my voice teacher's church (she was singing), and the solemnity of the Passion came to me as we walked solmenly, and silently, out of the church, and even to our cars afterwards, as the entire night showed the seriousness of the Passion. It was not the atmosphere back home where a karaoke production that had a “party” atmosphere featured a hip-hop tune that wasn't fitting with the clear classical move that was being made. It was evident that the Squirrel was serious but the inept church music leader was not. Another Resurrection Morning at another church a year later, months after I participated with that church's choir in a one-off singing excerpts from Händel's Messiah (and a week after I wanted to take my own life after falling ill hours before Cooper River Bridge Run XXX that had me thinking Menotti's The Consul!), they were singing “Surely He Hath Borne Our Griefs” on Resurrection Morning – this was one of the songs Stephen Distad and crew had me singing when I did the one-off at that church months previously. In another situation, I remembered they sang “Welten singen, Dank und Ehre” from Christus am Ölberge, Op. 85 (aka Hallelujah from Mount of Olives) by Beethoven in another Resurrection Morning service. I've heard the serious messages on Manudy Thursday (including O Sacred Head, Now Wounded – sound system people, corrupted by the idea of modern rock in churches, have lost their respect of classical singers needing no amplification in a sanctuary), and have blasted “party” type songs popular with the major secular music labels attempting to control the church music market, especially when sung by karaoke replacing types such as Mrs. Rothfuss, Mrs. Bradley, or Mrs. Suniga.

Ingrid Schleuter noted Warrenism is a “man-centred” movement, and the mockery of the Resurrection by the performance of the Jonas Brothers on Easter at this stadium was “public blasphemy”. She called this group as one that exemplifies “lust, flesh, and worldliness,” quoting Romans 8:5-8. With the performance by the Jonas Brothers replacing a full day of the study of God's Word, we are seeing at the kingpin of the Life Enhancement Centres the entire definition of what these venues promote. Normally on a typical Sunday in one of these buildings, God's Word will be replaced by an oddball study of how to improve your life (henceforth the “best life now” and adult-themed storylines that have been the bane of many a commentator). Instead of studying the Resurrection on that morning, the congregation at Saddleback will attend an entertainment event at the church. Now that is not what church is intended to be. Is the person headed to church on Resurrection Morn to study God's Word at church or to attend a rock concert? When we are supposed to read the story of the Saviour arisen from the dead (which is the reason why Hallelujahs such as Beethoven's and Händel's were written, not Christmas) that gave us one of the greatest works of sacred music ever, why are we bombarded with secular messages on a Holy Day? Even certain stores close on Easter the way they close for Christmas. Yet this kingpin of the Life Enhancement Centres decides that 40,000 in a Major League Baseball stadium to watch a secular rock concert is more valuable than to listen to a Resurrection Message that is the reason for this season, along with the appropriate sacred music. However, the sacred music is only there before the message. ◙
Email ThisBlogThis!Share to TwitterShare to FacebookShare to Pinterest
Labels: Religious Music