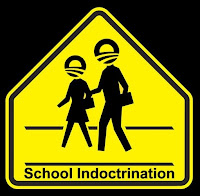 As they say on television, it's time to Cut to the Chase, and with two weeks and change until the end of this Chase, it has become evident that the government school system has become a source of propaganda promotion, similar to that of the Soviet Union.

Officials at Blackstone Valley Prep Mayoral Academy, a charter school in Rhode Island, rented buses and sent all 250 students and the faculty to New Hampshire to attend a rally for President Obama. One state legislator noted how Mitt Romney's events were not given the same treatment.

This sounds of Soviet propaganda with the promotion of Communism, the promotion of devolution of industry to the point Communist nations overtake us, the promotion of foreign law usurping local, state, and federal laws, sexual deviancy, thought crimes, pushing humanism as the state religion, the elimination of the nation's fundamental freedoms, elimination of the patriots of the nation, and promotion of new “heroes” that advance the liberal agenda. None of this is acceptable to those of us who studied in parochial school. Can you imagine Christopher Columbus is ignored while we promote Harvey Milk and Barney Frank in schools?

Empowering children to become slaves of the entitlement generation, sucking on food stamps, unemployment benefits, and promoting the green agenda that kills industries in favour of “saving mother earth” (Gaia worship) through the wind-and-solar mantra is a serious concern. Furthermore, “Dear Leader” (as Mr. Obama is being promoted via this incident in Rhode Island) is telling the children that being on government money is far superior to those who would rather brown-bag their lunches with home-grown vegetables, local grass-fed beef, pastured poultry, organic fruits and local milk, and spend what they would have spent in purchasing junk in shares in a stock that continuously pays dividends (Lowe's, SCANA) and makes money for its shareholders (Whole Foods Market, Under Armour). Why do you think he tags as a goal over 40% in dividend, capital gains, and income taxes for those who invest well in key staples such as those companies? So if I spend $25 per month in a stock that consistently grows and pays dividends, and I am paid $1 every quarter for dividends, you want to tax me over 50 cents overall on the money that I make? That's the class warfare Dear Leader pushes, and what those children are being taught.

That is poor economic thought, but trying to reverse generations that have learned under the Reagan era to invest in the stock market and instead trust in the government is what this Administration is trying to do with the youth. To the Obama Administration, stocks are bad while government entitlements are good. ◙

DISCLAIMER: Mr. Chang is a shareholder in all four stocks mentioned.
Email ThisBlogThis!Share to TwitterShare to FacebookShare to Pinterest
Labels: Culture, Education, Politics