On the decline of orchestras (and classical music) today 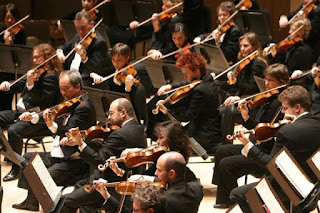 I began taking voice lessons after being inspired by a few friends, and in February 2002 took my first official foray into vocal lessons. I never thought I would see the day that classical music became "the" music for me, yet for Serena LaRoche, Leah Hungerford, along with choral directors Jennifer Adam, Peppie Calvar, Susan Kelly, Keith Walker, Lillian Quackenbush, Alicia Walker, and numerous other choral singers (Rebecca Cunningham), soloists (Ashley Briggs, Sarah Rich, Jaeyoon Kim, Jacob Will, Kelsey Harrison), my musical attitude took a turn for the better, and as we learned three and a half years later, perfect for Our Word.

Having sung in four Summer Choruses, two one-offs at various churches, and a Governor's Carolighting in the hastily organised choir, the dearth of choral opportunities at home with pop drivel and karaoke replacing serious material and orchestras concerns me. While listening to a talk radio show, the hostess noted, "We need to pray for the survival of classical music not only because of its beauty, but also because it reminds us of the centuries when our society was so infused by the Christian gospel."

Patrick Kavanaugh in World magazine commented on such musical problems. While he noted it may be economic, market, the bullying of bad rock music in our culture, it was easily noticed that Biblical text and Christian theology dominates classical music, noting Brahms’ Requiem, Händel’s Messiah, Beethoven’s Missa Solemnis, and Bach’s St. Matthew Passion. Compare the difference between the Mass in C Major and that of a modern rock tune certain Life Enhancement Centres play in their buildings. Nolo contendere est. Keep in mind in our society today, humanism is the official state religion, and to advance the cause they have to prohibit classical works from performance in order to force us to carry humanism's dark agenda found through the modern pop tunes of society today.