Hard to picture them as operas...

If you’re like me (and goodness knows, you should be), you probably can’t count the number of times you’ve sat at home watching The Manchurian Candidate on DVD and thinking to yourself, “This movie isn’t bad, but I’d really like to see it as an opera!” If you have had that thought (and I confess, I haven’t), the Minnesota Opera has heard you:  "The Minnesota Opera is commissioning a work based on The Manchurian Candidate, the 1959 political thriller that also was adapted into two movies...The new opera is scheduled to be performed in the 2014-15 season."

I’m not entirely sure what to think of these two developments, although I suspect they’ll either be works of genius or complete train wrecks. Of the two, I lean slightly toward the JFK opera, based solely on the success of John Adams’ Nixon in China. I would never have thought that would make a successful opera, let alone that I would have found it strangely affecting, and to that point it would seem that the story of JFK’s last day lends itself structurally and dramatically to a more compelling story. 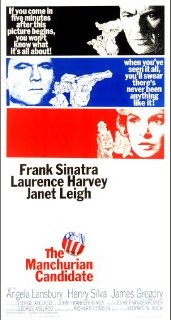 I'm more leery when it comes to The Manchurian Candidate, though. First of all, unlike JFK, it’s a work of fiction, and whereas you can interpret many facets of a real-life story (precisely because there are so many of them), an existing work of fiction has a much narrower frame of reference with which to work. You can cite the fact that Candidate has already existed as a book and two different movies, but in doing so you invite the second challenge: the iconic status of the original 1962 movie, which starred Frank Sinatra, Lawrence Harvey and Angela Lansbury. I haven’t seen the Denzel Washington/Meryl Streep remake, so it might well have stood on its own as a reimagination of the story*, but the original casts a shadow that’s very hard to get out from under.  As Terry Teachout recently said about such situations, "it's all but impossible to survive the comparison game."

*The original wasn't always faithful to the book either, but it got all the important things right.

Then there’s John Frankenheimer’s imaginative direction of the original, especially the famous “garden party” scene. How that winds up in the movie is difficult for me to imagine. Not impossible, mind you – just difficult. Very difficult.

But who knows? I’ve been wrong before (many times), and I’ll be wrong again (many times, which, come to think of it, is a reason you might not want to be like me after all). Candidate does come with solid credentials: composer Kevin Puts, who won the Pulitzer for his opera Silent Night, also done for Minnesota. I could be just as surprised by this as I was by Nixon in China. We’ll have to see.

I can’t help but think though, and not for the last time, that if it’s political opera you want why not remount something like Menotti’s The Consul, as timeless as they come? Or you could look to an opera that deserves to reemerge on the scene: Pizzetti's Assassino Nella Cattedrale, his interpretation of Eliot's Murder in the Cathedral.  Having just seen this, I'll have more thoughts to share in an upcoming piece.

Bobby passes along a sad note on a loss to the opera community:

Shanghai-born mezzo Zheng Cao, 46, died last Thursday night at her San Francisco home after a long battle with cancer.  Her roles include "Madama Butterfly," "Idomeneo," "The Mother of Us All," and "The Bonesetter's Daughter."  She is survived by Dr. David Larson, her parents, and a sister. ◙
Email ThisBlogThis!Share to TwitterShare to FacebookShare to Pinterest
Labels: JFK, Movies, Opera Wednesday/Thursday, Politics