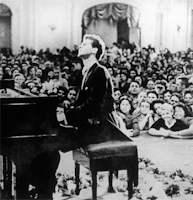 I had been told, by a friend in Dallas, to expect this news shortly, but it was still sad to hear.

Van Cliburn came from a time when a classical musician could be not only famous, but heroic.  His victory in the International Tchaikovsky Competition in 1958 was at once both a triumph for America in the Cold War and a victory for international brotherhood.  Khrushchev, asked by the judges if it was permissible to make the award to a foreigner, replied, "Is Cliburn the best? Then give him first prize." He was feted in both countries, received a ticker-tape parade in New York, and forever after remained one of the best-known pianists in the world.  CNN reported that he performed for every American president since Harry Truman, and I can believe it.  If Billy Graham is America's preacher, Van Cliburn was America's pianist.

But as great a pianist as he may have been (and there are those who think he could have become even better had he not chosen to embrace his celebrity as a way to spread goodwill), I think of Cliburn as even more admirable as a witness to the power of art.  At the end of that parade in NYC, as he was presented with the keys to the city, his words sent a message that we all really ought to take to heart.

"Because I'm only one of many. I'm only a witness and a messenger," he said. "Because I believe so much in the beauty, the construction, the architecture invisible, the importance for all generations, for young people to come that it will help their minds, develop their attitudes and give them values. That is why I'm so grateful that you have honored me in that spirit."

That speaks not only to the power of art, but also the power of witness.  Who knows how many people were influenced by Van Cliburn through the years?  How many may have been introduced to classical music, and had their lives affected in some way?  How many came to understand that unique power of music, and how it can only be a Divine Gift of an invisible Architect?  How many looked at him and may not have had the gifts he had, may not have been interested in music, but thought to themselves that because he could make a difference, so could they?

That's not a bad legacy to leave.  And the guy could twirl the ivories, too.

Here's a great clip of Van Cliburn as the mystery guest on What's My Line?


And here is a retrospective on Cliburn's remarkable life.  ◙