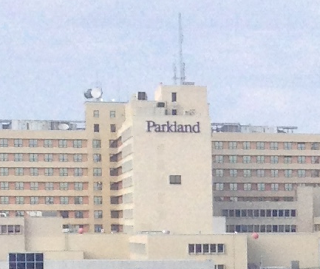 One of my first jobs upon moving to Dallas was at a company whose offices were on Stemmons Freeway, just across the street from Parkland Hospital. As a matter of fact, I could see it every day outside the window facing my desk.

On days when I had to drive downtown, my route back to the office would take me down Main Street and then onto Elm, with a turn past the Sixth Floor Museum on the way to the Triple Underpass before getting onto the freeway. The Sixth Floor Museum is housed in the former Texas School Book Depository, and as I passed the building I would drive over two white "X"s that had been painted on the pavement.  (They've since been paved over by the city.)

Dallas is a city full of history, and historical landmarks.  Last Monday night I attended a premier of a documentary on the police capture of Lee Harvey Oswald.  The screening was held in the Texas Theatre in the Oak Cliff section of Dallas, the theater where Oswald was apprehended after murdering police officer J.D. Tippet.  Several retired DPD officers took part in a panel discussion afterward, including men who knew Tippet personally.  One of them, Jim Leavelle, would be familiar to anyone who's seen the iconic picture of Oswald at the moment of his murder by Jack Ruby - he's the policeman in the light-colored suit who's handcuffed to Oswald.  His granddaughter, Kate Griendling, was the director of the documentary.

The city in which we live, Irving, is home to Ruth Paine's house.  She was the Quaker housewife who befriended Marina Oswald and took her in after she left her husband.  It is the house where Oswald slept on November 21, the night before the assassination.  It's now a museum.  A street en route to the Texas Theater, Beckley, is where the rooming house was in which Oswald lived.

The Sixth Floor itself is a remarkable experience. The actual window from which Oswald fired his shots is glassed off, preserved as a diorama of sorts, frozen in time to look as it did on November 22, 1963. However, a guest to the Museum can stand at a nearby window and get the sense of just how close Elm Street is to the building; a trip to the seventh floor allows the visitor to stand in the window directly below the sniper's nest.  A walk outside the building reveals the Xs painted on the street - the point at which the bullets struck Kennedy.  Farther down the sidewalk is a grassy knoll, known forever after as The Grassy Knoll.

As my words suggest, I believe that Oswald was the one and only assassin of John Kennedy.  Even if you don't believe that, however, there can be no denying the power of standing in some of the most iconic locations in American history.  Though I do not consider myself particularly well-traveled, I have visited the homes of Washington, Adams and Jefferson; I've stood on the ground where the first shot was fired at the final battle of the Revolutionary War at Yorktown.  I've seen where the tattered American flag flew as Francis Scott Key composed the words to the Star-Spangled Banner, and I've dipped my hands in both the Atlantic and Pacific Oceans.  Texas, home to the presidential libraries of both Lyndon Johnson and George W. Bush, offer future glimpses of additional historical artifacts.

Someone - I don't know who - once wrote that in Dealey Plaza, it is always November 22.  In all the times I've driven downtown, and driven past Dealey Plaza on the way to the Triple Underpass, I've never failed to see a crowd.  Some of them look at the Xs in the street, some stand on the Grassy Knoll (helpfully identified by a banner reading "Grassy Knoll"), some look up at the window where Oswald stood.  Last weekend we were downtown for the official lighting of the Christmas tree, and with all the festivities going on, lights and bands and face painting and vendors, there was still a crowd at Dealey Plaza.  It is a place, not so much frozen in time, but where time stands still.

And yet there's something about standing in the Book Depository (let's call it that for what it represents), on the 50th anniversary of the assassination of John Kennedy, an event that occurred (unlike those other events I mentioned) within my lifetime.  I don't have any memories of that time save the vague hint of a hazy recollection of a fleeting image which a three-year-old might have glimpsed as he was waiting impatiently for his cartoons.  That, I suspect, is what makes this different.

Standing inside that building, looking down on the street, hearkens back to a time that is 1963, and yet not 1963.  It is, in fact, my time, an era in which my first impressions were formed and first memories were captured.  It causes other memories, associated not by place or event but by era, to come to the fore.  It is not 1963 in Dallas, but the Sears store on Lake Street in Minneapolis, the building where I attended grade school, the sense of riding in my grandmother's car at night in the city of my birth, Minneapolis, as the neon lights marked out used car lots and Christmas decorations hung over intersections.  The 1965 World Series featuring our Minnesota Twins, the Texas tower shooting in 1966, MLK, RFK, the first Super Bowl, the moon landing - that's what I see standing at the window on the sixth floor.

It all sounds quite romantic, and there's really nothing romantic about it.  The Sixties were a crummy decade, full of violence and unrest, rebellion and license.  And yet, to paraphrase Charles Schulz' Linus, it was a good decade too, because it was the decade in which I was born.  At least that made it good for me.

What it is, is history.  Not just the history of John Kennedy's death, or for that matter his life.  Not even the history of this country, although it's certainly a major part of it.  It is the history of me, the history of us, of all those who posses the power to see that lifetime in the memories generated by a moment, a place, an event. It calls for reflection, the type lost to those who don't have much interest in anything that happened before their birth, or more than 15 minutes ago.

There are many who complain that too much attention is paid to JFK and his assassination, that it's a symptom of the narcissism of the baby boomer generation.  There's probably more than a little truth to this. Reading some of the things written in the immediate aftermath of Kennedy's death are, to be kind, a little embarrassing, full of purple prose and overemoting.*  Knowing what we do now about Kennedy's personal life underlines the situation, but the fact remains that even had Kennedy been a saint, the words written about him would have been overdoing it.

*Variously, a "great Christian," "one of our greatest presidents ever," "a kind, decent man," "a brilliant genius," and more.

But as Rick Brookhiser wrote at NRO earlier this week, those alive at the time of William McKinley's assassination in 1901 had only to remember back 20 years to the assassination of James Garfield in 1881. Many of  them might have lived in 1865, when Lincoln had been assassinated.  That made three American Presidents to experience violent death over the span of 36 years.  By the time of Kennedy's death in 1963, it had been 62 years since such an assassination, and very few remembered McKinley as anyone other than a figure in the history books.  Despite the Second World War, despite Korea, it was a generation ill prepared for the shock of a presidential assassination, especially one of a man who appeared as young and vital as JFK.  As Marc Ryan put it to me in our recent interview, while those past disasters might have belonged to other generations, the death of John Kennedy was that generation's disaster.  Just as there would be another generation scarred by Challenger and Columbia, and 9/11, and events we haven't even imagined yet. So I think we have to be gentle in thinking about that generation's apparent obsession.  As Brookhiser writes, "it will not be real to you until you have watched it yourself."

That doesn't mean that one has to subscribe to the more melodramatic, emotional assessments of it.  We don't know that Kennedy would have kept us from greater involvement in Vietnam.  There's quite a lot to suggest that civil rights legislation, passed as a tribute to Kennedy, might not have been as successful in a second Kennedy term generation of 1963.  In fact, as author Jeff Greenfield and others have suggested, Kennedy's scandals might well have come to light in a second term, and in that case we'd have an entirely different impression of Camelot.

Speaking of Camelot, I've written before about James Pierson's Camelot and the Cultural Revolution, which attempts to explain how the generation most wounded by Kennedy's death would up embracing the very causes which his killer, Lee Harvey Oswald, espoused.  Pierson thinks that Kennedy's death, and the adoption of the "Camelot" legend encouraged by Jackie Kennedy, was the defining moment in the collapse of the world as we knew it.  I've only lived in Dallas for six months, but it's been long enough for me to have formed a protectiveness about this city; while there were extremists among the right-wing elements in Dallas, there is no evidence that this atmosphere was measurably worse than some other Southern states - an atmosphere that cannot be understood out of context of the historical times - and had no influence on a Communist who hated America and sought to assassinate the Cold Warrior whose policies he opposed.

Dallas is not to blame, nor is America.  The Rolling Stones were wrong; we didn't kill John Kennedy.  It was Lee Harvey Oswald.

Idon't apologize for my interest in the death of John F. Kennedy, or some of the other news events of the past that have the ability to transfix me.  I don't consider myself a sentimentalist, or a wishful thinker, I don't whitewash the past or try to rewrite history.  I liked John Kennedy's style, and some of his policies, but I don't have much time for John Kennedy the man, and I have no time whatsoever for the attempts to sanctify him.

But I understand something of that need, the desire of people to attach a significance to his life and death. Because it's a way of giving our own lives and deaths a significance; if the death of a great man such as the President of the United States lacks meaning, what chance to any of us have?

Shortsighted perhaps, but also human.  So as we look back on these two days, November 22, 1963 and November 22, 2013, we look back at much more than what happened that day, and this one.  In remembering this anniversary, as with September 11, we remember the drama of human life and our part in it.  Thus has it been, thus will it always be. ◙
Email ThisBlogThis!Share to TwitterShare to FacebookShare to Pinterest
Labels: History, JFK, Meaning of Life, Television