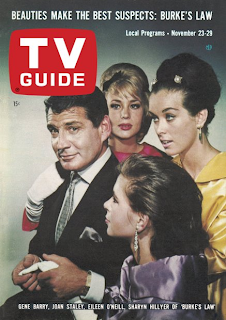 This week begins as last week ended, with all programming being cancelled in the wake of John Kennedy's assassination.

Minnesota was scheduled to take on Wisconsin on CBS' college football game of the week on Saturday; instead, TV viewers saw dignitaries arriving at the White House to view the President's body laying in repose in the East Room.  As they arrived, their shoes splashed in the water from the torrential downpour that soaked Washington that day.  The game was postponed to Thanksgiving Day, though it was not televised.

Instead of Glenn Ford and Red Buttons starring in Imitation General on NBC's Saturday Night at the Movies, NBC broadcast the latest news from Washington and Dallas, including reports that a receipt had been found for the mail order rifle used to kill Kennedy.  In the meantime, future Vice President Hubert Humphrey talked of Kennedy's legacy and Johnson's challenges, and replays of Johnson's work day were shown late into the night.

On Sunday, the American Football League cancelled its entire slate of games, while the National Football League carried on as scheduled, without TV coverage.  KMBC, the ABC affiliate, was supposed to show the game between the home town Chiefs and the New York Jets from the Polo Grounds, while just a few miles away the New York Giants were hosting the St. Louis Cardinals at Yankee Stadium, a game that would have been on CBS' affiliate.  NBC, without sports on Sunday afternoon, had scheduled a repeat of Gian Carlo Menotti's opera Labrynth, the story of a bride and groom searching for the key to life, on NBC Opera Theatre.  Nothing could have compared to what viewers actually saw: the murder of Lee Harvey Oswald in the Dallas City Jail, the solemn procession of the President's body from the White House to the U.S. Capitol, where it would lay in state in the Rotunda, the images of people filing past the casket while funereal music played in the background.  On CBS, rather than seeing a Grammy salute to "The Best on Record" with Frank Sinatra, Andy Williams, Henry Mancini and Bing Crosby*, viewers listened to Dan Rather, in Dallas, talking about the man who killed the man who killed Kennedy, Jack Ruby.

*And Vaughn Meader, whose JFK impression made the album The First Family an award-winning smash.  His career evaporated after that.  I don't know if "The Best on Record" was ever broadcast, but if so I would assume Meader's section was cut out.

On ABC, Edward P. Morgan is heard to comment to Howard K. Smith, "You keep thinking, Howard, that this is a dream from which you will awake - but you won't."  NBC aired a commemorative episode of the British satire program That Was The Week That Was, a tribute to Kennedy.