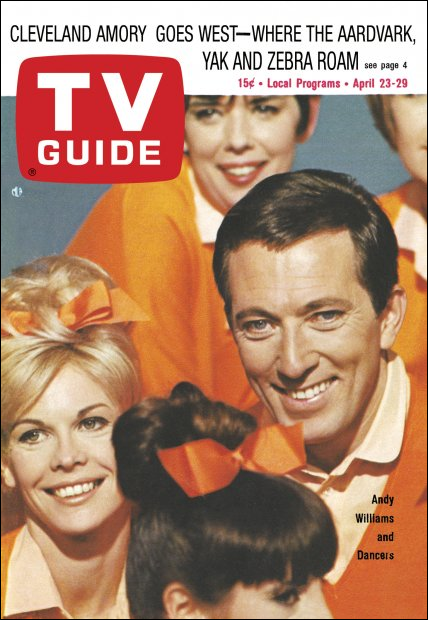 A mostly interesting "compilation of opinions about Andy Williams" is Dwight Whitney's cover story, which leads off this week's clip-filled TV Guide review.

I'm usually suspicious of articles like this, which consist of no original writing whatsoever, just a collection of quotes that could have been dug up (and probably was) by a research assistant.  However, it's a refreshing change from the celebrity hit pieces we read so often in this era of TV Guide, filled with snarky quotes from anonymous sources.  This one reads more like an authorized biography, as we get quotes from friends, family, and past and present co-workers, telling the story of Andy's rise to his current celebrity.  There's the odd sour quote, but the image that comes through is of a pretty good guy, one who's certainly ambitious and wants to succeed, but doesn't seem inclined to run over people in order to get there.

The most interesting thing to come from the story is how difficult it was for TV people to figure out what to do with Williams.  Is he an urbane sophisticate, dating back to the time when he and his brothers performed with singer Kay Thompson?*  Or is he the farm boy from Iowa, the kid in a tuxedo on a tractor, as he once put it?  Is he hip, simple, down-home, what?

*Fun fact: Although she had a successful singing career and was a mentor to Andy, she's best-known today as the author of the Eloise kids' stories, supposedly based on her goddaughter, Lisa Minelli.

The producer of his first television special, Bud Yorkin, puts it best when he says that "all he has to do is be himself."  He can control the audience now, Yorkin says, because "At last he is in charge."  And you know what?  Simply being Andy Williams led to a pretty good career for Andy Williams, didn't it?