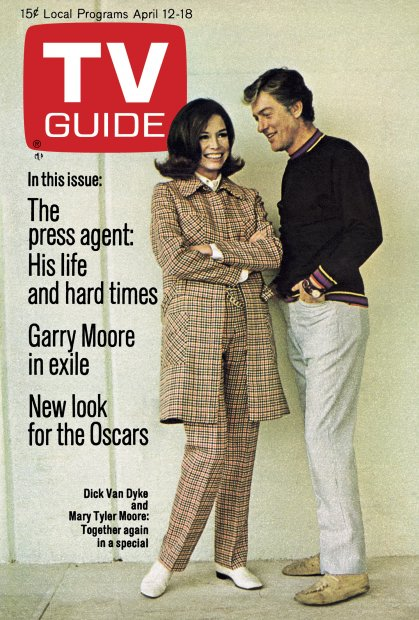 What's with the talk about the Academy Awards in this week's issue, you're probably thinking. Wasn't that last month?  Why are you bringing it up now, in the middle of April?

Well, that's the way it used to be, back in the days when the only significant movie awards show besides the Oscars was the Golden Globes, and those were confined to an hour-long broadcast on the Andy Williams Show.  Back then, the Oscarcast was held in early April or late March, usually on a Monday night, and it was the only awards show for most people.  Now, it's just one of many.

TV Guide's take on the Oscars concerns the revamping of the show, under the direction of famed Broadway choreographer Gower Champion.  Bob Hope has been banished as host, to be replaced by ten "Friends of Oscar" who will share the emcee duties.  The venue has changed, from the Santa Monica Civic Auditorium to the Dorothy Chandler Pavilion in Los Angeles.  The dress code is relaxed, with black tie replacing white tie and tales.  He even proposed getting rid of the bleachers outside the auditorium, where the fans gather to watch the stars walk down the red carpet, but that was going too far in the eyes of many, and Champion eventually relents.

Dwight Whitney, writing the article, expresses an appropriate level of skepticism regarding Champion's plans.  After all the Academy Awards are now "an electronic monster which no one seems able to control on any level."  But, in the end, the broadcast comes off pretty well.  It's one of the longer broadcasts in recent years, checking in at what now would be considered a svelte two hours and 33 minutes, but it brings in good ratings, along with some surprise winners, and Champion is accorded a standing ovation when he arrives at the after-broadcast party.  As stagnant and dull as recent broadcasts have been, it's a pity we don't have another Gower Champion waiting somewhere in the wings.