Some more thoughts on the "Sterling Scandal" 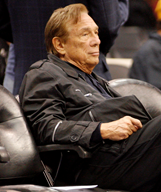 So let's see with the Donald Sterling scandal.  The mistress and Mr. Sterling had their little tête–à–tête, and Mr. Sterling did not want to use the name of his cross-town rival, similar to what we see in life when people refuse to mention their rival by name directly.  I've seen that in mentions everywhere, regardless of it being sport or business, where you never reference your rival directly.  That leads to the NBA's harsh punishment of Mr. Sterling and the forced sale that is upcoming.

Now let's see the other side of potential suitors for the Clippers.  Ah it reminds me of the damage of Hurricane Katrina in 2005 – and Seattle, of all cities, now the powerhouse capital of commerce in the country (see their ownership of The Washington BLEEP), being damaged most by Katrina, though it was thousands of kilometres away on the other side of the nation.  Seattle still pays for the damage from Katrina in New Orleans because the Pelicans played parts of two seasons in Oklahoma City and Baton Rouge while the Smoothie King Center was being rebuilt.  The popularity of the Pelicans led to the city being attractive to an NBA team for a full-time franchise, which happened a year after the two-year contract for New Orleans / Oklahoma City expired.

The push for returning an NBA team to the Emerald City was attempted when suitors attempted to take Sacramento's team away, and that was rebuffed.  But with the pickings ripe because of the NBA-forced seizure, could Chris Hansen and Steve Ballmer use the Clippers franchise to be handed to them and moved to Seattle?

And would that put Atlanta Spirit LLC, which has openly wanted to divest itself of its teams (a project that began in 2010), sell the Hawks to Canadian interests for an NBA return to Vancouver, where the Grizzlies expansion team flopped during its seven seasons before a sale-and-move to Memphis, where it took a few more years to gain success?  There is more NBA interest now in the Olympic city than there was in the past, and especially if Seattle receives an NBA team again, basketball would return to the level as football's Cascadia Cup, which uses all three Cascadia area teams (Portland Timbers, Seattle Sounders, Vancouver Whitecaps)?  This organisation has a reputation in selling their Atlanta teams to out of country interests (see the Thrashers sale and move to Winnipeg, especially since it has drastically affected Atlanta's minor-league hockey team in suburban Duluth (ECHL Gwinnett Gladiators), since it was used by both Turner Sports and later Atlanta Spirit to be jointly affiliated, a business model that the Braves later adopted.  (The Braves moved their AAA affiliate from Richmond, VA to Lawrenceville, GA in Gwinnett County in 2009, following the Thrashers model where their AA affiliate was in Duluth;  it is about 40 minutes from Gwinnett County to downtown Atlanta.  After the relocation, the Gladiators became affiliated with the Phoenix Coyotes as part of the five-team ECHL South with teams in Charleston, Greenville, Orlando, and Fort Myers.)

So the question is now is this the move that interests in the Cascadia region have wanted to return the NBA not just to two, but three, NBA teams in the area?  There seems to be that aura of destiny coming.  But is the Sterling case now a potential for Cascadia to return to the NBA?