Throwing Christians to the lions 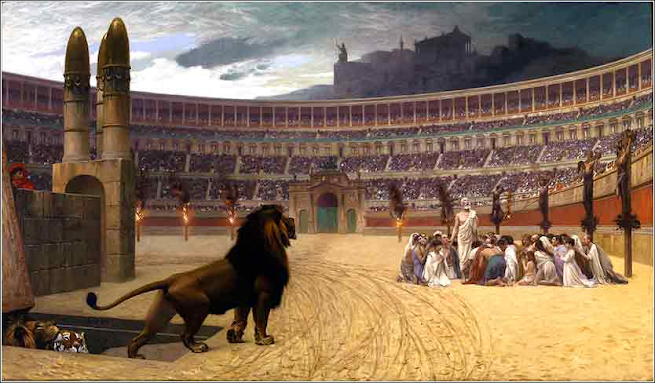 In the Merriam-Webster Dictionary, the word “pride” is defined as “a company of lions.” The mascot for the minor league hockey team in Florence that played in the East Coast league from 1997-2005, the Pee Dee Pride (“Pee Dee” is the name of the region in South Carolina that encompasses Florence), was a mountain lion.

Sexual deviancy groups and festivals will often use the word “pride” in their names. This is no accident; these organisations' activism targets Christians. They are the lions who devour Christians. They want to ban Christians from running foster care or adoption ministries at their churches because of their worldview (as we've seen in many states), they want to put Christians at the back of the foster care or adoption line while advancing sexual deviants to the front, and they have passed laws similar to those in other countries where ministers can be prosecuted for speech that violates the “civil rights” of sexual deviants. They want to drop Christians to a caste system where they and their followers are the emboldened class, while Christians are treated as the untouchables.

Equal Employment Opportunity Commission Commissioner Chai Feldblum has made it clear “sexual freedom” triumphs over religious freedom. In the new Utopia of this Administration, the three fundamental freedoms of Speech, Press, and Religion are wiped out by new government controls, and the only freedom that the nation will offer is Sexual Freedom.

At Eastman Kodak (a company that later was driven to bankruptcy, no less by the sexual deviancy movement), Rolf Szabo was fired for sticking up for Biblical Christianity at his office in Rochester, New York. Allstate fired Matt Barber for writing a column based on Biblical truth that the lions declared was offensive, and he is now the director of a major pro-family organisation. Other companies have fired employees for posting Bible verses. Now, with many countries have laws similar to the Shepard-Byrd Hate Crimes Act, ministers have been prosecuted for preaching the Bible, especially since activists have declared it hate speech, specifically targeting Leviticus Eighteen and Romans One.

With the arrogance of judges trying to impose same-sex “marriage,” implementation from humanist judges with an assist from the Autogol Strategy, or urban metropolis-run state legislatures (something the Founding Fathers warned would be a hazard and led to the Great Compromise, overturned at the state level in Reynolds v. Sims 50 years ago, thus leading to state legislatures being controlled by urban metropolises where one area may have ten seats in the upper chamber while some rural counties have no representation, something the Founding Fathers knew would be hazardous – can you imagine California having 12 Senators while South Carolina would be represented by one North Carolina Senator representing Buncombe County (a notorious liberal hotbed where they bought the NASCAR race track that is the site of the only win by a woman on a NASCAR Touring Series race -- 1988 by Shawna Robinson in the 4-cylinder Dash, or Baby Grand National, formula that was sanctioned from 1975-2003, who is battling breast cancer as of this writing -- and turned it into what Hall of Fame member Jack Ingram calls a drug park), and one Georgia Senator representing DeKalb or Fulton County), with the majority now from judicial activists who have taken their feelings to be priority over facts, they have made it clear they want Christians to be thrown to the lions.

It is no coincidence that sexual deviancy activists are called “pride” for a reason. They are the lions and they will throw Christians into their den to become their food. The persecution is the goal to wipe out Christianity and impose by courts, schools, and popular culture a new state religion of humanism. Look at the prosecution of Chick-Fil-A, Hobby Lobby, and now the Benham Brothers for their support of the Bible. While the First Amendment only bans Congress from imposing a state religion, it doesn't ban state legislatures, Hollywood, popular culture, or the courts from doing so. The pride is intending to use courts to overturn everything and impose a new belief system they dictate.

The judges running amok continue this danger. At this rate, are we becoming the New Humanist Nation with Christians being thrown to the lions, swallowed by the lions, as the activist groups want us to be consumed by them, henceforth their name?
Email ThisBlogThis!Share to TwitterShare to FacebookShare to Pinterest
Labels: Homosexual Lobby, Humanism, Sexual politics