Thoughts on The Death of Klinghoffer at the Metropolitan Opera 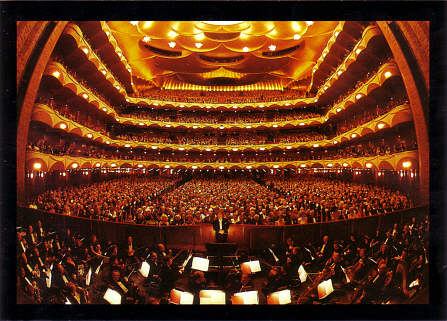 As Jay Nordlinger points out in this article, the Metropolitan Opera was scheduled to broadcast The Death of Klinghoffer as part of the company's 2014-15 HD series.  Now the Met has decided against the broadcast, although they will continue with the performance of the opera, because of concerns that it “might be used to fan global anti-Semitism.”   I don't want to repeat all of Nordlinger's article, because (1) you should read it for yourself, and (2) he's a better writer than I am.  The background of the opera is all there, but suffice it to say that it deals with a true story: the murder of Leon Klinghoffer, an American Jew, by Arab terrorists on a cruse ship nearly thirty years ago.  In cancelling the broadcast, Met General Manager Peter Gelb suggested that, though he didn't personally believe the opera to be anti-Semetic, he had come to the conclusion that televising at "would be inappropriate at this time of rising anti-Semitism, particularly in Europe."

Jay never approved of this opera, never felt that the subject matter was appropriate.  I have some sympathy with that viewpoint, but I'll leave that discussion alone.  The question, to me, is whether or not the Met should have cancelled the broadcast, and about that I have some definite ideas.

My first thought had nothing to do with the probity of the opera, written by John Adams (Nixon in China, Doctor Atomic).  I'd seen other Adams operas before, and had liked them a great deal more than I'd anticipated, so I was planning to give this one a look as well.  It was also one of the few Met choices that prompted any interest; as the broadcasts approach the ten-year mark, some repetition is inevitable, I suppose, but  between the broadcasts of operas they'd already broadcast previously, and the uninspired choices of the new ones, it was getting more and more difficult to work up any enthusiasm for the Met in HD.*  After looking over the new schedule, we'd already decided to skip most of them, but Klinghoffer - along with Meistersinger (it's Wagner, after all!) and the double-bills ofIolanta and Duke Bluebeard’s Castle and, later on, Cavalleria Rusticana and Pagliacci were the only ones we were really interested in.

*On the other hand, not going does save a lot of money.

When I first read last week that the broadcast was off, I immediately thought, "Great.  I suppose they'll schedule Carmen again, or another one we've only heard a dozen times."  (As indeed they did - yet another production of Rossini's Barber of Seville, which I love, but - come on.)  The Met's upcoming season is already bland enough, suffering from a decided lack of creativity; did they have to do Barber again?

Then I started to think more about the cancellation, and what it tells us not only about the Met, but about America in general.  The decision to cancel had come after consultation with Abraham Foxman, the director of the Anti-Defamation League, “representing the wishes of the Klinghoffer daughters.”  Foxman himself is, in my opinion, an Al Sharpton-like character who tends to see anti-Semitism behind every tree and under every bed, and the fact that violence and discrimination against Jews is on the rise does not mitigate the damage I believe Foxman does through his constant crying of wolf.

But let's suppose, for the moment, that Foxman is right in this case, as many people would agree.  Nordlinger himself points out that, though he hates the idea of the opera, "an opera worth staging is an opera worth broadcasting. And if it shouldn’t be broadcast, it shouldn’t be staged."  Indeed, the notion of cancelling the broadcast after consultation with the ADL is more likely to create the appearance of the Met being censored due to Jewish influence, which can hardly be the image they want to project.

In this very good piece from Alex Ross, it's pointed out that by the Met's own admission, 75% of those who attend the HD broadcasts are 65 years old or more.  Let me repeat that - 65.  My wife and I are no spring chickens, as those of you who follow me know, and there's no way we should be lowering the average age of the audience by as much as we do.  Gelb says that “Those are people who are so old that they can’t go the Met, to the theatre, anymore,” And yet they supposedly could have been aroused to violence by Klinghoffer?  As librettist Alice Goodman states, “The whole idea of pogroms emerging from the simulcast of a modern opera is more than faintly absurd.”

What does this tell us about the Met, and Gelb in particular?  It is hard to believe that someone as savvy as he is supposed to be would have failed to anticipate the controversy over the broadcast.  One might surmise that any GM that dim ought not to be heading up the West Paducah Civic Opera and Barber Shop Quartet, let alone the Metropolitan.  And, as Ross points out, this decision comes from the same man who tried to prevent Opera News, a Metropolitan Opera Guild publication, from presenting negative reviews of Met productions.*

*I still read Opera News, because I enjoy the articles, but I've given up on their Met reviews, which seem to have been much more positive since Gelb's threat.

Gelb was also the mastermind behind Robert LePage's grand - and expensive - production of Wagner's Ring cycle, which left many viewers (including yours truly) somewhat underwhelmed.  Perhaps "underwhelmed" isn't quite right, since ticket sales indicated a drop of fully one-quarter of the tickets sold for LePage's Ring, as opposed to the more traditional version that had been produced less than five years before.  Oh, and did I say it was expensive?  Maybe it's not related, but Gelb is now locked in a death struggle with the unions over their next contract, which could be, shall we say, interesting.

What this indicates to me is that Gelb, if he ever was the right man to run the Met, is no longer that man.  The Met has become stagnant, offering retreads that do little to make one excited about listening or viewing.  His innovations to the longtime radio broadcasts, such as dropping audience lectures, "informalizing" the opera quiz, and introducing color commentator Ira Siff to join announcer Margaret Juntwait*, have damaged the broadcasts, without noticeably moving the demographic needle.  His proudest accomplishment, the Live in HD series that was supposed to bring opera to the masses, has often been accused of pandering to the cinema audience at the expense of those in the opera house, with productions and performers much more suited to video than the in-person experience.  And for what?  If 75% of the audience is 65 or over, how does that lead to growth?

*My main complaint is that a solo voice in the booth speaks to us, the audience.  Anyone who's listened to a baseball game knows the intimate relationship between the announcer and the listener.  Introduce a second person in the booth and, no matter how knowledgeable they are, they invariably talk to each other - not us.

We know that the live opera audience is getting grayer by the moment (as it is in all arts), and now the Met itself admits that the audience in the movie theater isn't much younger.  Given all that, it's understandable that opera companies look for something safe, a sure crowd-pleaser.  But does that really serve the public?  My argument for many years has been that the vast repertoire of opera is being underutilized.  We hunger for something new, something different; but instead of turning to a Menotti, for example, we commission new operas left and right, many of which are heard once and then no more, or at least sparingly. Regietheater, which is all the rage throughout European opera houses, is frequently crude, sexually explicit, and blasphemous - hardly, one would think, the ticket to attract new opera attendees.  Officials look at the dwindling attendees and trot out the old, inoffensive warhorses, from Barber to Carmen to dozens of operas that are done over and over and over - again, not the kind of thing that would incline newcomers to go to the opera.  Producers try to jazz them up with ridiculous stagings, such as that of Tosca at the Met several years ago, and only succeed in antagonizing those who have been opera fans the longest.

We've been harsh critics of Gelb in the past, as this piece shows, so to expect anything different from him is not surprising.  He's botched this, in other words, but what else would we expect?  And given the death wish that not only the Met but so many companies have now, why would I be shocked?  I still love opera, still love going to a live production and watching a good one on the big screen.  But, having said that, the Metropolitan Opera is becoming a less and less important part of my life.  As Ross puts it, "the image that Gelb is trying to project—stylish, theatrically savvy, up-to-date without being avant-garde—has proved insubstantial."  What I seek is substance, and the Met is proving once again that there is precious little time any more to waste on things that don't have it.
Email ThisBlogThis!Share to TwitterShare to FacebookShare to Pinterest
Labels: Metropolitan Opera, Opera