The lack of responsibility led to the Ward and Brown cases 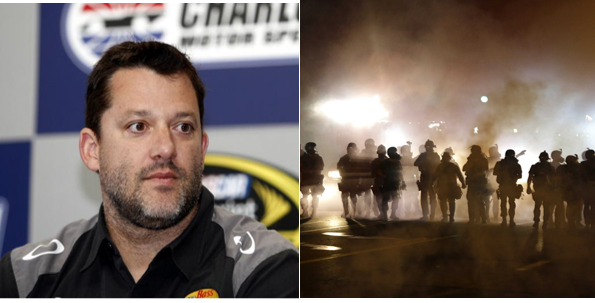 For wrath killeth the foolish man, and envy slayeth the evil one.” – Job 5:2

Sitting through my thoughts over the week's news, I looked at notes from my Ryrie Study Bible, purchased while at a college retreat, and is falling apart from a decade and a half of consistent use, thinking of this verse while finagling through the news in both the Canandaigua, New York and Ferguson, Missouri cases, where in each case, a man died from wrath, and outrage from the nation has become the issue. Upon the review of each story, it was evident that wrath played a role in both cases.

In the Canandaigua incident, which some are wanting the “assailant,” Anthony W. Stewart, 43, of Columbus, Indiana, charged with manslaughter, the disturbing video evidence proved negligence not of Mr. Stewart, the 1997 Verizon IndyCar Series1 and 2002, 2005, and 2011 NASCAR Sprint Cup Series champion driver, proved the driver allegedly struck by Mr. Stewart, Kevin Ward Jnr, 20, had lunged towards a second driver (the #45 car) in the 360 (cubic inch displacement engine – a lower-cost series versus the 410 cubic inch) sprint car event before he gathered his anger at Mr. Stewart by lunging in front of the #14 car, with dim lighting in a dark firesuit and helmet, with little (if any) reaction time to react with his actions. This incident has forced Mr. Stewart in hiding, while his operations (Stewart-Haas Racing, Tony Stewart Racing, Eldora Speedway, True Speed Communications) are run by associates in the interim, while some are wanting him guilty when it's evident Mr. Ward had lunged in road rage that he crossed the line, forcing motorsport authorities to tighten rules regarding driver behaviour when exiting the car (which, in theory, will lead to more fights in the pit area). In motorsport, a driver involved in an incident is often forced to be restrained by circuit officials if he attempt to charge at another competitor. The Canandaigua Motorsports Park officials did not restrain Mr. Ward in any matter, which is disturbing considering most circuits would have officials do their hardest to prevent other competitors from charging at other cars.

In the Ferguson incident, reports are the teenage assailant and a friend entered a convenience store (where the most popular items sold are tobacco, alcohol, and gambling tickets) and committed a strong-arm robbery where a full cigar case, valued at $50, was stolen in the robbery. The clerk in the store called police and likely called it an “armed robbery”. When questioned, the suspects then attacked the policeman (the cigars were stolen, and the suspect may have looked too young to own tobacco), with reports coming that the shoplifter and his accomplice were involved in an incident with police, attempting to resist arrest, with part of the battle involving the policeman's gun. When a policeman could be held defenseless by an assailant, he has a right to defend his weapon, which he did away from these assailants who were going after his gun, and shooting the policeman was a possibility.

Think about a motorist who travels US Highway 21, which I travel often, with a 88 KPH speed limit on the two-lane road. If you are traveling at 130 KPH, more than 41 KPH over the limit, that's a six-point penalty (0-16 is two points, 16-40 is four points, 41 and up is six points; twelve is a suspension). If you resist arrest and go on a high-speed chase, you will face extra forms of police technique to stop you from your antics. Reckless driving will result in police using severe tactics to stop the dangerous driving, similar to what happened when the policeman was having to stop the assailants from attempting to use his gun to attack him.

If you look under 18 years of age with the full box of cigars, let alone having stolen the tobacco, that is an automatic suspicion since tobacco sales are prohibited to those under 18, and with the actions that took place as proven by cameras, it was serious case of stealing, which even our Ten Commandments prohibit. However, in today's humanist teachings, there are no standards. They are taught there is no right or wrong, and it is based on feelings. The looters forget the most important part of the Ferguson story in that Mr. Brown and his accomplice first engaged in the strong-arm robbery, which in effect was shoplifting. That's stealing and violates Exodus 20:15. But once again, they are not taught the Bible today in schools. Popular culture has turned away from God's Word in favour of relativism.

This leads to an article this past week in the Southern Baptist Convention's Ethics and Religious Liberty Commission by Collin Garbarino of Houston Baptist University2. Mr. Garbarino, a professor, assigned a paper to students based on Thucydides' accounts of the Sparta and Athens battles, and Athens' attack on Melia when the city refused to join their side in the Sparta-Athens battles, led to the annihilation of the area. The professor found the students unable to see how Athens' moral failure was based on their self-centred arrogance, and they could not see how democracies could only stand with moral fabric. Such is why we have urban arrogance in an attempt to push a new humanist religion as the state religion, and attempts by activists to eliminate the moral fabric by wiping out standards based on the Bible, and instead impose standards based on man.

When considering that, the moral relativism of those who ransacked Ferguson as “social justice,” even reaching into the idea they want what they want, and refuse to be responsible for behaviour that led to the death of the robber.

In both the Michael Brown and Kevin Ward Jnr cases, both men were irresponsible. In Mr. Ward's case, he charged at race cars traveling at safety car speed in anger, which led to his own death for not following correct protocol after a crash, and wanted to take the situation with Mr. Stewart immediately, and not await until later to see what happened. In Mr. Brown's case, he committed crimes of robbery, and when suspicion aroused he was involved in illegal behaviour, he showed no responsibility and resisted arrest, even threatening the policeman.

Whatever happened to responsibility? Neither man was being responsible after their incidents, leading each to rage that led to their own deaths. We need to be responsible now. And moral relativism is allowing a lack of responsibility to dominate. Think about it.

1INDYCAR attempted to run the season to end the season at Indianapolis; that plan, which had been proposed for the 1996-97 season, was to have the season-opener in Loudon 1996, through the five-race season that continued through Las Vegas, and 1997 races at Disney World and Phoenix, before finishing at the Indianapolis at the 500; during the calendar year change, INDYCAR decided to finish the season at the end of the calendar year, meaning new races in Fort Worth, Fountain (Colorado), and Charlotte, and the two established races at Loudon and Las Vegas would end the 1996-97 season; further INDYCAR-sanctioned seasons have been calendar year only. Mr. Stewart's title is written as per style guidelines established by INDYCAR. Please note “INDYCAR” in all capital letters specifically refers to the sanctioning body, formerly known as the Indy Racing League until the end of the 2013 season. The name change was formalised in the 2014 INDYCAR rule book.

2The article refers to a movie that is now on DVD; when Mr. Chang attended the movie as part of a church trip in March, he discovered the movie was an feature-length film advertisement for Vivendi Universal Music around its storyline. Obviously, in the twelve years since taking his first voice lesson, and further learning of church music from friends such as Ingrid Schlueter, and reading of theologians regarding church music history, which effectively separates church music into a antebellum, postbellum ('gospel song'), and modern emotionalism era (OCP, GIA, and the Michael Jackson Family Trust that controls modern church music), he cannot justify a movie that promotes secularised music that is too often played in churches today.)