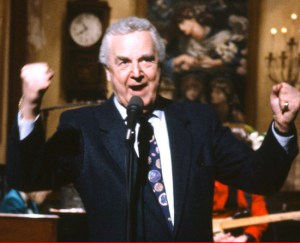 Was there a better voice for television than Don Pardo's?  At the same time, he was able to project warmth, authority, credibility.  He could announce a game show like the original Jeopardy!, while he could also break the news of JFK's shooting, and be absolutely the right voice for both.

Many of us, of course, know him best as the announcer and occasional foil on Saturday Night Live, and there was more than one time when his introduction of the cast was the best thing about the show.  It was then that his voice called not for authority, but humor - and the little tremor he put into it was just right.

Was he the most famous television personality that nobody would have recognized?  He did appear on-camera occasionally on SNL, but most of what he did was behind the scenes.  Nonetheless, he was elected to the Television Hall of Fame, and rightfully so.  The fine obit in The New York Times mentions that new SNL cast members "couldn’t wait to hear their name said by him,” according to Lorne Michaels.  It must have been like a kid growing up dreaming of playing baseball in Yankee Stadium and having his name announced by Bob Sheppard.

That Times bit also tells us something of what early radio and television was like.  Pardo, of course, got his start on radio, as a staff announcer.  But if you think that was a simple job, waiting around to give the time and station ID, you're wrong.  "As a staff announcer, he did more than introduce shows and read commercials. The announcer also played the role of engineer, getting the radio programs going and cuing up the right bits at the right time. If you could not do those chores, he said, you would not last as a radio announcer."  I wonder how many of our radio and television personalities could do that today?

His voice will continue in reruns of SNL, but many of his other work is lost, either literally in the sense that the shows (like Jeopardy!) no longer exist, or lost because his voice can't be used again - there's no occasion to play a pre-recorded Pardo introducing a show like SNL, because the cast names are all different.  I haven't watched SNL for years - in fact, though I think of myself as having a pretty good memory, I literally can't recall the last time I saw it.  Probably when Dennis Miller was doing Weekend Update.  But Michaels says the show will present a tribute to him this fall, and I'll probably tune in for that.  For SNL is one of TV's longest-running shows, and Don Pardo was its longest-running cast member.

Here's a wonderful appearance he made on Weird Al's video I Lost on Jeopardy (along with original host Art Fleming), which gives you a pretty good feel for the original show.  I love his line, "You don't even get a lousy copy of the home game!"  As is always the case with parody, it's the little details that make the difference.


Here is his voiceover on NBC television bringing the first news bulletin on JFK:


And here he is talking about getting the SNL gig:


Don Pardo died at the ripe old age of 96, one of only two people (the other being Bob Hope) to have a lifetime contract with NBC.  He had a great career, working right through the end of this season's SNL.  And best of all, he sounds like he was a good man.  R.I.P., Don Pardio - we'll miss your voice, and we'll miss you.


Cross-posted to It's About TV!
Email ThisBlogThis!Share to TwitterShare to FacebookShare to Pinterest
Labels: Don Pardo, Obituaries, Television