S. Truett Cathy was never afraid to devise, even in his 90s 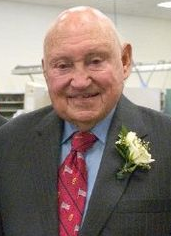 Looking at the obituaries this week at Chick-fil-A for S. Truett Cathy, who was 93, he not only had his three children, but four grandchildren currently own restaurants (from all three children).  A daughter served on missions field along with her husband, and he later returned home to serve in the executive offices at the organisation that commissions missionaries at the denomination for 20 years.  The boys actively teach Bible studies at the churches near their homes, following in his footsteps south of Maynard Jackson Airport.  They've become national and sponsor college sports, with the only Conference Guaranteed Game of the Week (the CBS SEC broadcasts are guaranteed national;  all ESPN and Fox games are regionally selected, and there is no guarantee of a conference receiving the same time slot every week), an ESPN College Football Playoff game, and the National Championship Game when the game is assigned to New Atlanta Stadium.

But even in his 90's, Truett had a dream, something that showed as he was slowing down, he was not even slowing down – he was still full throttle on ideas.  In the 1990's, the Truett's Grill restaurants opened in Atlanta to join the Dwarf Grill and Chick-fil-A.  After acquiring a strip mall in Peachtree City, he looked at 8,000 square feet of space and conceived what he called a dream restaurant.  At 91, Truett Cathy thought of a final project as a special restaurant with fun, life with family and friends, and a larger than regular restaurant.  It was a full service restaurant that he and colleagues developed.  Things you would never see at either of his three restaurants were there – down to Hawaiian seafood and treats, salads, burgers (at Truett's Grill, naturally), and of course those signature chicken sandwiches, albeit with some toppings you'd never see in the mainline restaurants.

All we need is Brian Tyler's version of a 1968 Morton Stevens tune, a black 2014 Camaro SS, and Truett Cathy, in December 2013 at 92, had that project that would eventually be his final project.  And it was out of the box thinking that would make an Atlanta trip more exciting – the cows wearing leis, hanging signs, “Eat More Shrimp” or “Eat More Fish,” or even “Seafood Truett Style”.