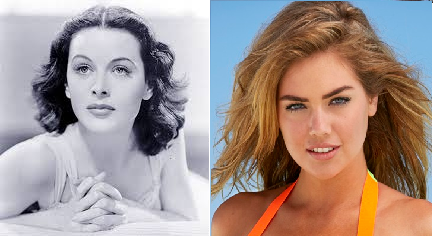 I've thought that there was something I should say about that celebrity photo-hacking scandal from last week, but I wasn't quite sure which way to go with it.  I mean, there are enormous cultural overtones involved*, not to mention meditations on freedom, privacy, and the meaning of both.  I thought that Grantland's Molly Lambert did a pretty good job touching on some of the deeper implications of it all, but it wasn't really what I would have written if I'd had the chance.  And as the days passed, I began to fear that I might be the only blogger out there not to have written about it.  What to do, what to do.

And then came Fred Schwarz's piece in National Review Online.  I mean, this is what I'd been looking for from the beginning.  Its sense of symmetry and irony is unmatched, and it has all the elements of one of Rudyard Kipling's "Just So" stories, not to mention the Six Degrees game.  It tells, in a few short paragraphs, the story of the classic movie star Hedy Lamarr, and how the hacked photos can be traced directly back to her.

Lamarr was a big time movie star in the '30s and '40s.  She appeared in the extraordinarily (for the time) provocative movie Ecstasy and she costarred in Hollywood movies with everyone from Spencer Tracy to Clark Gable to Bob Hope.  If you're not familiar with her work, you still might recognize her name from the Blazing Saddles character Hedley Lamarr.  So Lamarr was a star, both famous and infamous.  There was one problem though, at least for Hedy: her small breasts.  In a story regarding her movie Samson and Delilah, in which she started with movie muscleman Victor Mature, Groucho Marx supposedly told director Cecil B. DeMille that "he had gotten the lead roles backwards, because  'Victor Mature has much bigger knockers than Hedy Lamarr."”

Because of her self-consciousness, Lamarr came to call on George Antheil, a man of many talents: composer, musician, author, inventor, and dabbler in endocrinology.  Antheil suggested hormone treatments to enlarge Lamarr's breasts.  They didn't help much, but it did lead to a friendship that would take a different turn some time later, when

Lamarr told Antheil about an idea she had. Her first husband, whom she had divorced, was the Austrian arms manufacturer Fritz Mandl, who did extensive business with Nazi Germany (though his father was Jewish, as were Lamarr’s parents). From Mandl and his associates, she had learned about radio-controlled torpedoes, and how the enemy could jam the signals that were used to guide them. Lamarr wondered: What if the guidance signals were sent out in a series of brief bursts, each on a different frequency, and then decoded with a device inside the torpedo? In that case jamming, which requires a steady signal, wouldn’t work.

Antheil immediately grasped the importance of this idea, and after he and Lamarr worked out the details, they took out a U.S. patent, which was initially kept secret for security reasons. The patent can be seen here (Hedwig Kiesler Markey was Lamarr’s legal name at this point; she would eventually rack up half a dozen husbands). While somewhat similar schemes had been proposed or discussed earlier, this was the first patent in the field of what is now called frequency-hopping spread spectrum.


The Lamarr-Antheil patent has been used frequently in many forms of technology over the years, one of which being - the cell phone.

The same cell phone that, through years of evolution, is used by many of us - including Upton, Jennifer Lawrence, and all those other celebrities - to take selfies.

And that, my friends, is how Hedy Lamarr's small breasts are forever linked to Kate Upton's large ones.
Email ThisBlogThis!Share to TwitterShare to FacebookShare to Pinterest
Labels: Culture, Humor