Flashback Friday: Wish I'd written that 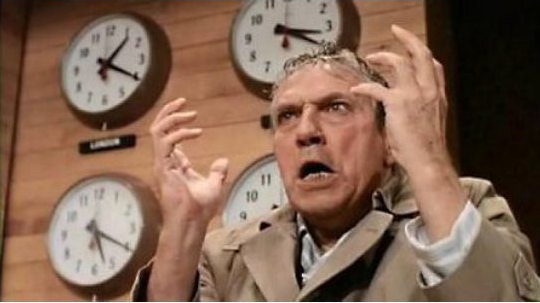 Idon't have to tell you things are bad. Everybody knows things are bad. It's a depression. Everybody's out of work or scared of losing their job. The dollar buys a nickel's work, banks are going bust, shopkeepers keep a gun under the counter. Punks are running wild in the street and there's nobody anywhere who seems to know what to do, and there's no end to it. We know the air is unfit to breathe and our food is unfit to eat, and we sit watching our TVs while some local newscaster tells us that today we had fifteen homicides and sixty-three violent crimes, as if that's the way it's supposed to be. We know things are bad - worse than bad. They're crazy. It's like everything everywhere is going crazy, so we don't go out anymore. We sit in the house, and slowly the world we are living in is getting smaller, and all we say is, 'Please, at least leave us alone in our living rooms. Let me have my toaster and my TV and my steel-belted radials and I won't say anything. Just leave us alone.'

Did you ever notice now many people get the line wrong?  They'll say, "I'm mad as hell, and I'm not going to take it anymore."  Chayefsky was quite specific in what he was writing.  He didn't say, "it" - he told everyone that this what he was lashing out at.  The sheer dehumanization of man.  The quote can be applied to anything, but to fully appreciate it you have to put it in context.  He wasn't raging at everything, but something very specific and direct.  It only seems, nowadays, as if it applies to everything.