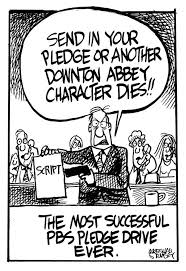 (Pocatello , Idaho) -- KSPD, Idaho 's largest public radio station, announced yesterday that it is moving to a new "all membership drive, all the time" format as of March 1st.

Station Manager Philip T. Lucre announced the new format is in response to recent audience analysis. "Our rating figures show that people love membership drives," says Lucre. "The drives might seem like they're boring, tedious, even numbing, but we're finding that people just keep listening. Better yet, they keep sending in money and membership pledges, and we're very happy with that."

KSPD's most recent membership effort resulted in contributions of more than $20 million to the non-profit station, which is also underwritten by major foundations, local business sponsorships, commercials, tax breaks, the sale of services and merchandise, donations from large corporations, and state and federal tax dollars from the American people. "We're not talking golden goose here," said Lucre, "but it's certainly a winning formula, bottom-line, cash-flow wise. We couldn't do what we do without our listener's support. They know we're a non-profit and that we're counting on them."

Why do people keep listening to people asking them to send in money? Lucre believes it creates a drama that people find compelling.

"Our membership drives are great entertainment," he says. "You've got the tension built up by our self-imposed goal deadlines, people wondering if we're really going to make it. You've got the stories and personal testimonies finely crafted by our public relations department. The ringing phones in the background add a certain electricity. It's really good stuff, a lot better than any music, news or intelligent conversation you used to hear on the radio."

Lucre refused to answer questions about KSPD's recent purchase of four additional radio stations in California and Arizona , or its reported majority ownership of new office buildings and a resort casino being built in Winnemucca, Nevada . "We're a large business entity, and we need to maintain solid economic resources," he did say. "And besides, whatever we do has one main goal in mind: to provide the people of Pocatello, Idaho the kind of radio programs that they love and that meet their local needs."