How can Mayweather earn more than Pacquiao? Seriously, the winner should win more than the loser 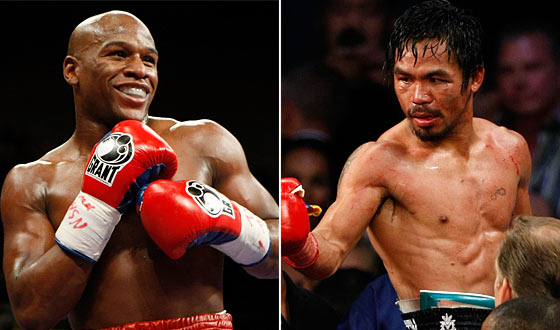 Major League Baseball splits postseason money by teams, with each team splitting the money the way they desire – $22.33 million for the World Series winner, $14.89 million for the loser, $7.44 million for League Championship losers, $2.02 million for second-round losers, and $930,396.93 for first-round losers.  (In 2007, after a Colorado Rockies minor league coach was killed, the team voted one playoff share for his widow;  in 1920, the Cleveland Indians gave the family of a player killed by a pitch a full playoff share.)

The stories came to my attention this week when details of the May 2 Floyd Mayweather vs Manny Pacquiao boxing match were released.  Mr. Mayweather would receive $120 million, and Mr. Pacquiao would receive $80 million should the match be conducted as scheduled, based on the live gate and pay-per-view receipts.  Why are boxers paid a guaranteed amount, regardless of winning or losing?  25 years ago, Mike Tyson received six million dollars and James Douglas only received $1.3 million for the famous Tokyo Dome match that Mr. Douglas won after nine rounds and part of the tenth when the referee reached the count of ten upon Mr. Tyson being knocked out.

When professional athletes in most sports are paid based on their performance with the winner receiving more than the loser, why does boxing differ?  Why is the boxer's winnings fixed, regardless of result?  Should the loser earn more money than the winner?  How much sense is there when the winnings are already set before the match, when the match should be first, then the winner and loser's shares be set, not be set per fighter?  The only instances where the loser's share of winnings would be greater than the winner (not bonuses) would probably be in Jeopardy!, if the winner's score is less than $2,000.  (The second place contestant wins $2,000, and the third place contestant wins $1,000.)  Last year at the first Pocono NASCAR race, Brad Keselowski (second) earned more than winner Dale Earnhardt, Jr., but that was a byproduct of the Penske driver leading more laps (lap leader money at many levels of motorsport pay money to lead each lap), and bonus plan money (which he was eligible;  then Hendrick #88 was not eligible for the bonus plan in question);  the first-place prize was greater than the second-place prize.  A similar rule exists in INDYCAR with the Leader's Circle.  The game show and motorsport situations are special instances caused by special circumstances.

Is it fair to make boxing payouts performance-based only and not guaranteed?  You would not pay a golfer who wins less than one who finished second.