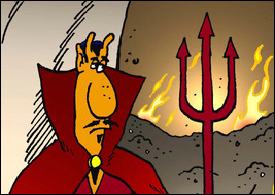 "I wanted to say 'why don’t you just ask me? I’ll tell you. And I’ll tell you something else: dang kids drive too fast. They get out of school and streak down here like it’s devil-take-the-hindmost.' And then they’d say 'well, this is our job, and it’s more exact than asking you, and I think the devil could take any of them, possessing supernatural abilities as he does. It’s possible the devil would take the first-most, because that person would be more surprised and despair.'

'I see your point. And you have to wonder why the devil would do such low-level work, like chasing people.'

'Well, throughout history - at least in Western literature - he engages on a personal level with people to make them sign over their souls, so it’s obvious he’s a hands-on type. Perhaps he just enjoys his work.'

'Never thought of it like that. Then again, we always assume that the guy doing the transacting is The Devil capital D, not a lesser devil who’s handling the grunt work. Think of it - who’s running hell when the Devil is swanning around with contracts in hand, trying to get souls one at a time?'

'Hell probably runs itself, inasmuch as it runs at all. Well, we have to get going.'

Wish I had said something, but I just waved: hello, municipal employees putting rubber-coated wires in the street."