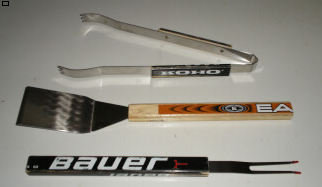 There was the case of a bet between mayors in the NHL's Western Conference when the mayor of Calgary sang the megahit from Frozen, "Let It Go," in the city chambers as part of a lost bet with Anaheim's mayor, complete with a classic Ducks jersey.


There's also the bet where Deval Patrick had to send Martin O'Malley lobster after a Ravens defeat of the Patriots, and also when Prime Minister Harper won President Obama's Yuengling.

But now this.  The Ultimate Southern War has come to hockey.  The mayor of North Charleston (South Carolina Stingrays) is placing a bet wit the mayor of Allen (Americans) in the ECHL Kelly Cup Final.  The prize is nothing short of what Myron Mixon, Tuffy Stone, and Moe Cason could appreciate.  A fourth Stingrays Kelly Cup would mean a cow, while a third consecutive Americans title (two CHL Ray Miron President's Cup and now ECHL Kelly Cup after the merger) would mean five hogs.  Each represents their own style of barbecue -- whole hog (such as Sweatman's in Holly Hill) and brisket (a popular barbecue form in Texas).

So it isn't just hockey.  It's a battle for barbecue bragging rights.  And you would only expect that in the South.  Go figure.