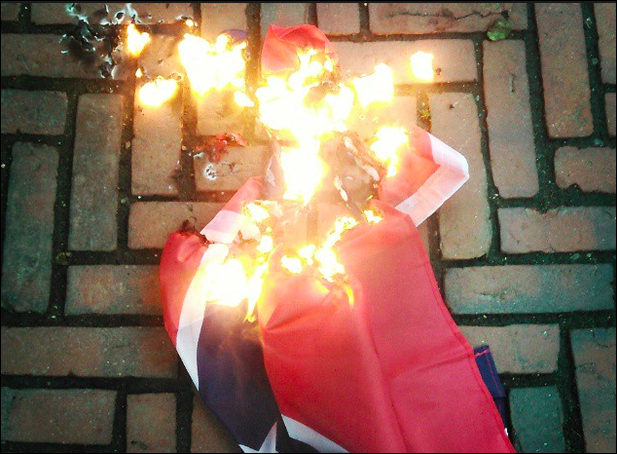 Last month, I sang in the Summer Chorus performance of Haydn's Missa in tempore belli (Mass in Time of War), also called Paukenmesse (The Kettledrum Mass), which in Haydn catalogues is Mass No. 10 in C Major (H: XXII:9).  During the concert day, as the movement to remove the Confederate Battle Flag from the Soldiers Monument began to be rampant, funded by George Soros in an utter victory of the liberal activist, the second major victory against the state in seven months (striking down the state constitution's marriage definition amendment was the first, also supported by his minions) that effectively gave him control of the state, I talked to our tenor soloist, a college professor, who was befuddled at the discussion against the Confederacy.

Based on historical references I had researched, I informed him that the deconfederatisation movement has its roots in the denazification efforts of post-WWII Germany in 1946, but more sinister was Mao Tse-Tung's Cultural Revolution in the 1960's.  Mao purged anything that was against the Communist empire, as we learned, and following a further discussion on The Kelly File, a guest noted the deconfederatisation effort's roots within Soviet Russia after the Bolshevik Revolution, ironic considering one top organisation leading the new Cultural Revolution of the Left is the Americans United Against Militarism (as it was known at founding), which protected Bolsheviks.

He was shocked and said there was no reason for the deconfederatisation efforts.  What I know now was the Soros activists began the movement with signs placed near Mother Emanuel in the days after the shooting, trying to blame everything on a flag, and create racial tension when the real problem was, as we previously mentioned here, nihilism, a worldview of nothingness, which proved itself because the target was a church.  And with the sad state of affairs after the New York Court (as Justice Scalia called out for its one-city bias), the worldview of the atheists was in control of the nation.  When our Governess was soundly defeated in court to protect the state's constitution against Soros and other Bolshevik minions, and the pressure was up again, she sadly caved and let other cities push deconfederatisation.

Now the pressure is turning up with victory on one end of the deconfederatisation efforts where the next stage – removing Confederate monuments, including names of places, and even war venues, including Fort Sumter, Gettysburg, Bull Run, and historical places such as the CSS Hunley – is beginning.  As I've read over the years, the next stage in the left's revisionist history is to develop new heroes to fit their narrative – and advancing the sexual deviancy agenda that lost in 30 states and could only win with the President and his minions in packed courts to overturn majorities over 75 percent is one such way.  When our Civil War dead, war tactics that were 50 years ahead of the Germans (see the CSS Hunley), the first ironclad battle between the CSS Virginia (fka USS Merrimac) vs USS Monitor,  Battles of  Fort Sumter, Bull Run, Vicksburg, and Gettysburg, the Burning of Atlanta (where the Calgary Flames' nickname is sourced), and even Memorial Day (for Union War Dead) are purged from our history books under this effort, the replacement will be to advance the sexual deviancy elites' agenda down where a certain sexual deviancy leader's birthday would replace Memorial Day, as seen in California already.

Will the Gettysburg Address be banned because of its Civil War reference and be replaced by Dear Leader's celebration of throwing Christians to the Lions?

What type of whitewashing are we allowing with deconfederatisation?  The flag is only the beginning.  Do not be fooled – the sinister gooool is an elimination of all Confederate heroes and leaders – Davis, Lee, Stevens, Jackson, and other heroes of the Confederacy.  No wonder the Left demands “Stonewall” refer to a sexual deviancy bar that turned into victory for their movement when every Southerner knows Stonewall is the nickname for General Thomas Jackson, whose death on May 10, 1863 is observed as Memorial Day in many states.

Are we headed to 1924 Russia, where Petrograd and Yekaterinaburg, among others, had their Czar names replaced by Communist leaders' names, which was prominent in all of the East Bloc (Chemintz, and Saigon are two other cities where such Communist whitewashing happened – Yekaterinaburg and Chemintz has since been restored to its original name, while Petrograd has since been restored to its pre-World War I name)?  I fear that every Confederacy related name and battle field will be purged for the celebration of the current Dear Leader and his social justice efforts.

Kyrie eleison.  Why the hate of the Civil War?  Are people trying to associate the war with racism as in this shooter's moves?  By doing so, they are associating the Confederacy with the shooter – which was never true.  Enough with this false narrative in order to push a new revisionism.