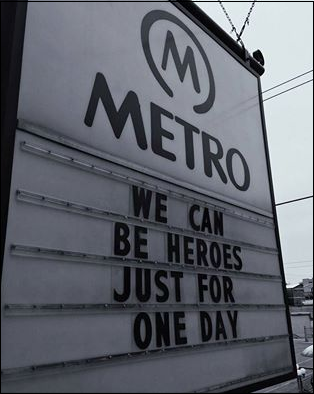 I quoted from this song once, when I was running for the state legislature so many years ago. There was something noble about it, the idea that it wasn't old-fashioned to dream of big things and grand deeds, to think that such things were possible for ordinary individuals.

It's perhaps the quintessential Bowie song, the one that so many have come back to in the days since his death, and I think it's because it strikes something in the hearts of people, the possibility of striving for something, even if it's just for one day, even if you wind up failing in the end. And there is something noble about that, particularly in the "why bother" world we seem to have lapsed into too often.

There's no sense in adding to the millions of words written, not when one has nothing new to offer. A couple of very good posts from people I follow in unlikely places, ones you might not ordinarily read: F1 journalist Joe Saward here, and Catholic blogger Steve Skojec here. Check them out when you get the chance.